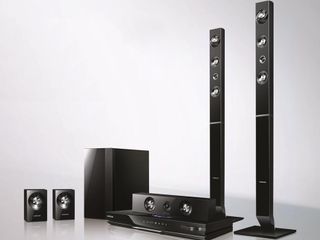 Samsung has launched a new line of complete home cinema systems at CES this week.

The bookshelf approach of the HT-D7100 comes in a cubic design with Full HD 1080p playback for both Blu-ray and DVDs, as well as upscaling for lower-definition videos.

The cable-averse may be pleased to hear that wireless is the name of the game: as well as wireless HD video transmission, the HT-D7100 has a wireless subwoofer, as well as Wi-Fi access to Samsung Apps.

A lot of Dolby

When it comes to audio, you're looking at Dolby Digital Plus, Dolby TrueHD and DTS-HD Master Audio, and 3D Sound to go with the 3D images.

Also available are a 7.1 channel home theatre system complete with a wideband amp and super-tweeter speakers, in the form of the HT-D6750W, and an impressive sound bar for adding 3D audio to an older system.

As if all that wasn't enough, there's also a new range of accessories from Samsung to go with its shiny new kit.

The touchscreen remote that comes with some of the new TVs will be available to buy separately, as will a wireless charger for all your Samsung accessories.

Spectacle wearers will also be able to order prescription lenses that can be fitted to their 3D active glasses to avoid the double-spec look.

If video calling using your connected TV is your bag, then you may want to invest in the upcoming HDTV webcam from Samsung too.

As with all Samsung's releases at CES this year, UK release dates and UK pricing remain elusive.