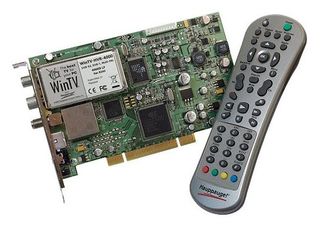 The card is PCI-based, so works with a desktop PC. It offers a direct connection to a satellite feed

Hauppauge has announced a four mode tuner that can connect to satellite TV broadcasts as well as Freeview and analogue TV signals. The WinTV HVR-400 can also receive the free-to-air HD satellite channels, although there's currently only one - BBC HD. The HVR-400 also enables ou to record programmes to your PC's hard drive using the H.264 codec.

The company visited Tech.co.uk to give us the heads-up on the new card which is due to be launched at this week's CeBit show in Hannover.

The card will go on sale for £179 and connects to an external antennae source or satellite dish, so you will need to have an existing dish pointed at the appropriate Astra satellite if you want to receive satellite broadcasts.

The card is PCI-based, so works with a desktop PC. CyberLink PowerCinema is the included software, while there's a full EPG. Owners can watch live or schedule recordings. You can also switch between different satellite sources should you require.