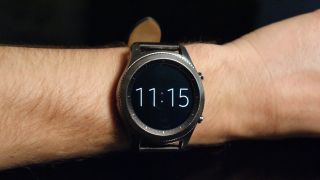 We don’t know a huge amount about the Samsung Gear S4 yet, but one thing that’s looking very likely is that it will have a bigger battery than the Samsung Gear S3 or Samsung Gear Sport, and today there’s more evidence for that, as Samsung is apparently planning to use a Panel level Packaging (PLP) manufacturing process.

That’s according to ET News, citing ‘industry sources’, and it’s a process that means the chip will take up less space on the motherboard, in turn leaving more space for other components.

Now, that doesn’t necessarily mean that a larger battery will take up the remaining space, but it’s the likely option, given that we recently heard a rumor that the Gear S4 would have a 470mAh battery – up from 380mAh on the Gear S3 and 300mAh on the Gear Sport.

As well as leaving room for a larger battery, this PLP method is also apparently cheaper than the wafer-level packaging (WLP) method that Samsung would otherwise be using.

Whether those savings will be passed on to buyers is unknown, but there’s a chance that the Samsung Gear S4 will therefore cost less than its predecessors.

We’ll hopefully find out at some point this year, as with rumors starting to roll in we’d expect to see the Gear S4 – or Samsung Galaxy Watch as it might be called – before too long. In fact, this source claims that it will arrive in August, so we may see it alongside the Samsung Galaxy Note 9.