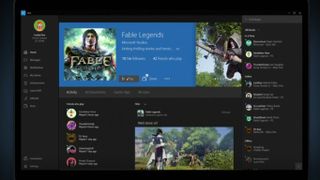 Update: All the features mentioned below have finally gone live. To start streaming on your PC, on your Xbox One go to Settings > Preferences > Allow game streaming to other devices and then install the latest version of the Xbox app on your Windows 10 PC or tablet. Finally, in the Xbox app on Windows 10, select Connect > + Add a device from the menu on the left side of the app, then select your Xbox One console.

The option to stream games on PC is only available to Windows 10 testers and is not available on Windows 7 or 8.

Original article on the July update below...

Microsoft moved the needle on Xbox One/Windows 10 compatibility today by announcing four major updates coming to Windows 10's Xbox app, including an update that enables users to stream Xbox One games to their PCs.

The first and probably biggest news out of Xbox One's June announcements detailed on Major Nelson's blog is that Windows 10 testers can now stream Xbox One games to their PCs over their home network. Nelson said that Microsoft will take the data into consideration when improving the experience for all users when it becomes available to the general public.

In other news, game hubs - a recent addition to Xbox Live on Xbox One - are coming to PCs and will offer the same sort of insightful statistics that they do on consoles to their desktop brethren.

Also announced today, Game DVR is getting a modification to its shortcut. Windows users can now press the "Windows" key and "G" to bring up game capture, or set it to whatever combination you'd like in the settings menu.

Finally, as a throw-back to the Xbox 360 days, Windows 10's Xbox app will now include a section to edit your digital avatars.

Sure, the updates aren't as big as today's Windows 10 OS for Xbox One news, but the updates do lend credence to the idea of a Microsoft ecosphere slowly falling into place.