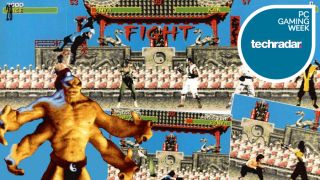 Mortal Kombat was best-known as a bloodthirsty console beat-em-up, but it had an impressive outing on the Amiga too, as Amiga Power's original 1994 review notes here.

Oh no. Why me? I hate beat-'em-ups and I hate Mortal Kombat in particular. I played it on the SNES, and laughed pityingly at the lack of all the blood and gore, the entire hook that the game hangs itself on. I played it on the Mega Drive, and sneered haughtily at the way I completed the entire thing on my first go on the third difficulty setting by only using one move.

And now I've got to play it on the Amiga, with a load of disk accessing on top of everything else. When the rest of the team come back from holiday (which is the reason I've landed the review in the first place), there's going to be a full and frank exchange of views, I can tell you.

Now, if you're a smart kind of reader, you'll have realised something already. You'll have realised that no one starts off a review of Mortal Kombat (a beat-'em-up) with something like "I hate beat-'em-ups, and I hate Mortal Kombat in particular," unless they're pretty swiftly going to follow it up with "…but what a surprise – it's really great!" We're not completely stupid.

And so it is with Mortal Kombat, more or less. Against all my better judgement and all my previous and entirely valid opinions, I had a really good time playing Amiga Mortal Kombat. Seems to me like some serious investigative journalism is called for here.

Why is this fun, then? Why, especially, is it fun when all the versions of the exact same game on everything else were so dire? It's not the graphics, that's for sure. The big selling point of the Midway coin-op on which this is based (well, one of the two big selling points) was that the fighters were all digitised real people, as opposed to Street Fighter 2's computer graphics.

On the Amiga, though, while things look good at first glance, a closer examination reveals what's actually a pretty rough and bitty rendition of both characters and background. But hey, easy solution – don't look closely. It works, and that's the important thing.

Is depth of gameplay the secret, then? Hardly. Unlike Street Fighter 2, all the characters in Mortal Kombat have basically the same set of moves, with the same strengths, the same speeds and the same ranges.

Oh, sure, they've all got their own special fireballs or throws or whatevers, but the obvious character of SF2 isn't really present (and not helped by the fact that so many of the characters look the same as each other – Johnny Cage and Liu Kang could be brothers, as could Sub-Zero and Scorpion). You never find yourself identifying with your on-screen surrogate, or developing a favourite beyond the fighter whose special moves you find the easiest to execute.

Speed, maybe? Well, we're getting closer. Compared to the distinctly sluggish Amiga SF2, Mortal Kombat fairly zips along, but speed alone doesn't make a great beat-'em-up, as Body Blows proved. (To me, anyway – the rest of the AP staff at the time Team 17's light-speed fighting game came out loved it, but it never won my heart or mind. It just felt half-finished, somehow). But a decent speed is certainly a Good Thing, so let's put a small, tentative tick in that box on Mortal Kombat's checklist. Still doesn't really explain why it's fun, though. What else could make it stand out?

Sound? Surely not. What does sound matter? Who ever notices or pays attention to game sound? Hello again, smart reader. Yep, Mortal Kombat's sound is one of the most crucial factors in making it so enjoyable. While several beat-'em-ups seem to treat sound as a last-minute afterthought (and I'm worried that it might be the thing that cripples Renegade's forthcoming, fab-looking, Elf Mania), Mortal Kombat comes complete with some incredibly solid and meaty thumps and crunches that really make it feel like you're inflicting some damage on your opponent.

As well as being deeply satisfying in play, this also helps immensely when it comes to giving characters a feeling of 'weight', which was more than anything else where Body Blows fell down – in that game it felt like you were controlling a couple of cardboard cut-outs rather than real, three-dimensional, flesh-and-blood gladiators.

In Mortal Kombat, though, even a splash of blood falling on the ground has an aural accompaniment, and it affects the atmosphere more than you could imagine. Music, too, is well-used – for example, in the 'Endurance' matches (where you have to fight two computer characters with just your single energy bar), the entry of the second character is heralded by a tension-increasing key change in the soundtrack which pumps your adrenalin just that little bit higher. Even the speech sounds alright for a change.