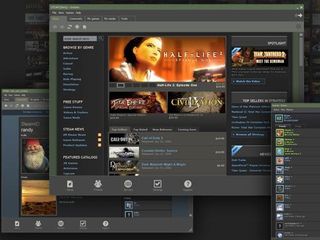 Valve - Steam powered is the way to go

Valve has announced a number of new tweaks to Steam, which has made the game download service that little bit faster.

In a blog post, Valve explains that it was focusing on making the core of its service – which is downloads in case you have been living in a non-internet-enabled cave – speedier and a lot more effective.

Given the millions of people that use Steam, any improvement in its servers would be welcomed, especially if it meant that the whole download process was speeded up.

"The new content system is designed to do two things: deliver better download rates in more places around the world, and also to simply streamline the publishing process on Steam, ultimately making it possible to ship more games than we would have been able to with the old system," said the post.

"Over time, more and more of the content on Steam will be delivered using this new system," Valve explained.

"Soon, Dota 2 will be delivered using it. In the meantime, if you'd like to try out this new content system you can do so right now; if you download a 1280x720 (HD) trailer from the store, it will happen via the new content system."

Valve has also made downloading updates to games easier. Instead of having to download whole files for a game update, it will decipher what is the new part of the file and just update this.

It's the little things...