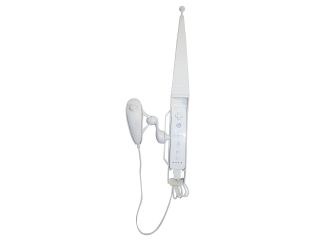 4Gamers has announced the officially licensed 2.1 Speaker System for Wii, styled in the shape of a Wii Nunchuck controller, with the Wii console sat bang in the middle of the two speakers.

The 2.1 system delivers full stereo sound and offers the selection of a 3D surround sound mode which apparently "takes you inside the game and the music".

4Gamers informs us that: "Designed to compliment the Wii console, the subwoofer provides deep and responsive bass, which when combined with the satellite speakers, produces an impressive 30 Watts (RMS) output power – with all functions remotely controlled to a distance of up to 7 metres."

The subwoofer cabinet is also magnetically shielded to prevent magnetic radiation from the speaker magnets distorting your television.

If all that wasn’t enough, for hardcore fans of Sega Bass Fishing, 4Gamers has also released a Wii Remote fishing rod, specifically for use with that game. TechRadar has gone all misty-eyed thinking back to playing the original Dreamcast version of the game all those many moons ago (well, nine years or so!).

The Wii 2.1 speakers should set you back £69.99. For more you can check out www.feelthenoise.tv, while the Bass Fishing Rod will only set you back a tenner, so there really is no reason to NOT get a bit of virtual Wii Fishing in now.