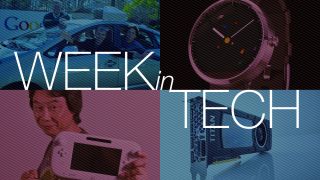 It's been a bad week for humanity. Google reckons we're too dumb to be in charge of cars, Microsoft appears to be rewarding software pirates and Apple's still refusing to admit that the gold Apple Watch Edition is an elaborate joke. But there are plenty of reasons to be cheerful, and they're all in this edition of Week In Tech.

Good news for software pirates: Microsoft will give you a free copy of Windows 10, and we're not talking about some kind of anti-piracy sting operation either. Microsoft has announced a summertime launch for Windows 10, and said that "we are upgrading all qualified PCs, genuine and non-genuine, to Windows 10." The announcement was made in China, where Windows piracy is rampant, and Microsoft is essentially offering an amnesty to users of pirate copies so that they can become legitimate customers.

Mobile Mario and a console with a codename

That's not all Nintendo's up to. It's also got a brand new console coming, and this week it buried us in an avalanche of exciting information. The new console is currently codenamed NX, we're told it'll have a completely unique approach to gaming, and it'll be out in 2016. And that's it so far, but that hasn't stopped an enterprising Australian retailer from taking pre-orders already.

Galaxy S6: save the date

Dah dah dahhhh, dah dahhhhh! We reckon a graphics card as powerful as the Nvidia Titan X deserves a bit of a fanfare, and when you discover that it's $1000/£879 (about AU$1,313) you'll probably need a bit of a lie down. That's a lot of money, but it delivers a lot of power: 8 billion transistors, 3072 CUDA cores, 7 teraflops and 12GB of RAM, to be precise. Is that good? Dave James says it is. The "titanic new GPU" is "the fastest single GPU card around."

Watch, Wear and the war for your wrist

Google would disagree with that, of course, and there's increasing evidence that Android Wear will come to iOS. An Android Wear developer called MohammadAG has created a workaround that enables Android Wear to talk to iOS, and he also says that version 4.4 of Android Wear contains "iOS related code" which he says "confirms they're working on it."

The Apple TV isn't just getting cheaper. It's getting more channels too. A new report says that Apple will add 25 new channels to the device including ABC, CBS and Fox, and that the channels will also be available on iOS. Don't get too excited about it if you're outside the US, though: most of us are still waiting for iTunes Radio, never mind Apple TV channels.

Google cars are smarter than people

Ever wondered why Google removed the steering wheel from its self-driving car? Speaking at SXSW, the fabulously named Google X boss Astro Teller said it's because puny humans aren't a "reliable backup" for self-driving tech. People do "really stupid stuff" behind the wheel, Teller said, and they're likely to do even stupider stuff if they suddenly have to take control in an emergency.