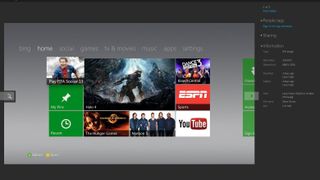 The slow rollout is still continuing around the globe, with all markets expected to have the latest dashboard by Oct. 23.

Though new tricks like Internet Explorer and better Kinect voice recognition joined the anticipated Xbox Music service as new features, it appears some older apps have been discontinued.

With the latest update, Microsoft removed both the Facebook and Twitter apps from the Xbox Live store.

It's unclear right now why the Facebook and Twitter apps have been removed from the Xbox Live app marketplace.

Despite the annual app updates on the Xbox 360, the Facebook app itself hasn't seen an overhaul since its launch.

Neowin speculated the introduction of Internet Explorer may have had a part in the removal of the social networking services.

Users who had previously downloaded either app will be able to continue to access both Facebook and Twitter through their Xbox 360s, which makes the removal that much more puzzling.

Microsoft even still lists both Facebook and Twitter as partners on the "Be Entertained" portion of the Xbox Live web page.

TechRadar has reached out to Microsoft, and will update this story if and when a request for comment is returned.