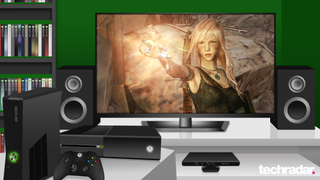 Most people's final Lara Croft fantasy looks nothing like this

Claire 'Lightning' Farron, the playable heroine of Final Fantasy XIII, is to receive launch-day DLC that will dress her, entirely out of context, as Lara Croft.

Upon hearing this news, I think my eyes rolled so hard I'd be surprised if someone didn't hear them rattle all the way over in Gran Pulse.

"The DLC, a wardrobe staple for any avid adventurer, will include Lara Croft's unmistakable gear, as made famous in the Tomb Raider game released in 2013, and Tomb Raider: Definitive Edition released earlier this year," screamed a Square Enix press release accompanying the announcement.

Ah yes - that iconic, entirely non-descript combo of a tank top and some grubby trousers immortalised in a game barely a year old. My heart sings at the very thought of seeing that get-up once more.

With this day one DLC pack, you get Lara's clothes, a ridiculously ordinary-looking riot shield, and an oversized survivor's pickaxe as your weapon.

Plus, Lightning is covered head-to-toe with dirt, just like the real (2013) Lara was. "A collaboration between two awesome heroines!" the press release proclaims elsewhere.

Nope, I think you mean a collaboration between Squeenix's marketing departments, who are no doubt currently high-fiving each other somewhere on a job well-spun.

Optional gaming crossover costumes are nothing new, of course; they're pretty much an accepted fact of the industry nowadays.

Accepted with a kind of weary 'if you must' shoulder-shrugging from fans maybe, but accepted nonetheless. EA has a habit of cross-pollinating its characters, for example – you can equip a variation of Mass Effect's N7 armour in Dead Space 3, if you fancy it.

Capcom is also guilty of the practise, but at least it does things with a touch more self-referential humour. In Xbox One exclusive Dead Rising 3 you could dress protagonist Nick Ramos in a Mega Man costume whilst having him do Street Fighter-like Shoryukens.

But though Lightning has over 80 costumes in the game, and several of these are adapted from other, better known Final Fantasy characters, none of these seem to quite suit her, or tell us who she really is.

She's such a joyless, personality-free sponge of a protagonist, that she makes the fantastical seem drab and uniform simply by association. That Square Enix has her aping characters more successful and popular than she is just sad and, in truth, mildly insulting to this long-time Final Fantasy fan.

"It's a contrivance that literally no-one wanted, and so stands out for what it is - a ruthless cash grab on behalf of its publishers"

It seems silly to say in relation to a game where you can dress a female pink-haired protagonist in little more than a belt and some chaps, but this gimmicky announcement in particular just seems so… tacky.

It's a contrivance that literally no-one wanted, and so stands out for what it is – a pretty ruthless cash grab on behalf of its publishers.

What's next - an Agent 47 bald cap and suit? An Adam Jensen shades and overcoat combo? I can promise you now, I most certainly didn't ask for this.

I've complained about this topic elsewhere, but to me, this endless parade of novelty costumes is a symptom of one bigger, sorry fact – that the Final Fantasy franchise has completely lost its way, and it bothers me more than it should because, once upon a time, Final Fantasy really meant something to me.

It used to be about adventure; about escapism and epic tales that you could embark upon and lose yourself in without someone trying to monetise your every move.

"The way I see it, these new costumes are a way to eke out extra sales and extra coverage without adding anything real or interesting to the Final Fantasy universe."

And yet in ever more increasing ways, these latest FF iterations seem to be prioritising bland market research, product placement and corporate box-ticking over originality and imagination.

The way I see it, these new costumes are a way to eke out extra sales and extra coverage without adding anything real or interesting to the Final Fantasy universe.

I never thought I'd see the day a Final Fantasy game included online leaderboards and social media functionality, but didn't allow you to grind random battles in order to level up your team.

That was my, and I suspect a lot of people's childhoods in one midi victory fanfare, and yet Square seem more than happy to kick it to the curb if it serves their current purpose.

To me, this latest release is, and will always be, Final Fantasy in name only, and this Lara Croft costume embarrassment is simply the straw that broke this camel's back. Final Fantasy, hell, even Lara is better than this crass corporate carry-on. For shame.