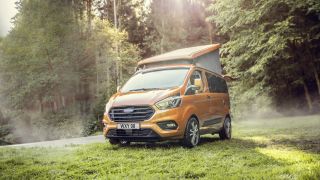 Camping in a tent is fun, but there’s a downside when the weather takes a turn for the worse, mainly because you're on the ground. Ford’s foray into the world of camper vans is therefore a great alternative to bedding down for the night on a soggy groundsheet.

And, boy, have campers come a long way in recent years. Gone are the days where you’d see dodgy homegrown conversions pootling down the A303 on the way to Devon or Cornwall belching out black smoke. Today’s motorhome is a thing of real beauty, particularly when it comes in a fun and funky metallic colour like the one TechRadar has just experienced first-hand.

While modern day campers are still, in essence, the same panel vans used by delivery drivers and builders, they’re nothing like those horrible old conversions that also featured interior walls fashioned from marine ply and worktops laminated with Formica.

In the case of Ford’s Nugget, the camper is based on its evergreen Transit Custom platform, which continues to get better with age. With that rock-solid foundation the camper side of things takes shape via a collaboration with Westfalia, the motorhome meisters who basically wrote the rulebook on how to create a decent camper.

There are variations on the Nugget theme too, with a long wheelbase version offering additional space for a toilet if you're averse to taking a trip to the block in the middle of your campsite. The one we tried was the standard wheelbase edition, so it arrived sans chemical toilet.

Ours also featured a folding roof, which hinges up at the front end to produce a double bed area over the, er, lounge. The seats in this area also convert to make another snug double-sleeping arrangement, so it’s perfect for an average family. If you’ve got more offspring then the long-wheelbase Nugget Plus model might be the way forward.

Access to that top ‘bedroom’ is via a nifty little aluminium ladder that stows away in a cupboard if you need to spend time in the rear kitchen portion of the van. This area of the Nugget is where the real magic happens as a series of very nicely designed and built cupboards and cubbyholes reveal all sorts of handy items.

Up on the worktop there’s a cooking hob and next to that there’s a circular sink with hot and cold water on tap. Granted, you’ll bump your head occasionally and catch your shoulder on the carefully crafted fixtures and fittings, but it’s not a bad space for cooking a spaghetti bolognese or, perhaps, a minor league full English for breakfast.

To the left of the stove there’s a lift-up lid that reveals a deceptively deep 40-litre compressor fridge that, in our example, was chock full of chilled drinks, cold meats and an incredibly pungent disc of Camembert.

Anyone on our campsite with a penchant for ripe soft cheese was curiously drawn to the Nugget while smacking their lips in eager anticipation while posing questions like ‘Can I look inside?’ or ‘How much does it cost?’ By the end of the weekend though we were finding it difficult to get the impregnated odour of said cheese off our clothes. And we love cheese.

So sure, the Nugget is quite cosy and holds on to smells a bit, but if you’re travelling with family then that’ll probably be nothing worse than you’re used to normally. Elsewhere, there’s plenty of storage for cutlery, plates, clothes and the array of different gear that you’ll need once you’re enjoying the great outdoors.

Ford seemed to think it was prudent to provide us with plenty of towels in our vehicle, which was sensible even if they were tucked away in a cupboard next to a solitary toilet roll, some crisps and a large sausage. But this curious combination did underline the undeniably practical edge of the interior layout if nothing else.

Yep, Ford’s Nugget is a likeable thing when it’s parked up on site. But, it’s also very driveable. Everyone we spoke to who’d spent a few hours motoring down the highway in France seemed to be in universal agreement on that point. The 2.0-litre EcoBlue diesel mated to a six-speed manual gearbox makes the version we had more of a cruiser than a speed demon.

There’s also a six-speed SelectShift automatic gearbox on offer too. Meanwhile, the driving experience is made better by a raft of driver assistance technology, including Cross Traffic Alert, the oddly named Pre-Collision Assist with Pedestrian Detection, plus adaptive cruise control and a rear wide-view camera for parking the van in those tight campsite locations.

Ford has crammed in plenty of boredom-busting tech to keep people happy too and there’s as much on offer as most family saloons get these days. Ford’s SYNC 3 connectivity and entertainment system packs enough appeal to keep most people interested in a long haul down the highway. Plus, it also has the capacity to be controlled using voice commands or via the eight-inch touchscreen.

SYNC 3 is compatible with Apple CarPlay and Android Auto for good measure. Another neat touch in the main cabin area is the way the front seats can be swiveled 180 degrees for when you’re parked up (a process speeded up by a folding handbrake).

We also liked the sound system in our Ford Nugget, which seemed pretty good at pumping out tunes while we pulled the (vinyl) curtains and got the upstairs bed made up. Getting into the upper deck required a little practice and we’re not sure what the experience would be like for anyone really tall.

However, once you’re into the roof space it’s certainly accomodating and pretty comfortable. There's a pair of reading lights on stalks up there too if you’ve got a good book to finish before bed. If you’re a light sleeper though this fold up roof does have a minor drawback in that it’s sides are made of synthetic tent-like material, so outside noise travels through it. Similarly, heavy snorers will be audible and, naturally, very annoying to fellow campers.

Out back there’s a rack where you can secure your mountain bike. This can be moved aside to let you gain access from the rear of the motorhome via a lift up tailgate. There is also, apparently, an outdoor shower available on some options of the Nugget although we didn't see any evidence of that on our model.

But we were spoilt in any case thanks to a surprisingly decent shower block a stone’s throw away. Fresh and waste water, incidentally, is supplied and subsequently contained in on-board tanks that both have a generous 42-liter capacity.

Despite the added weight of all these fixtures and fittings, the Nugget is economical too, with that frugal diesel delivering trouble-free motoring and seemingly using only a few sips of fuel over a reasonably long distance. Diesel might be getting a bad rap currently but the latest Ford engines are up there with the best of them.

Unfortunately nobody could seem to give us any indication of actual pricing for the Nugget during the weekend we tried it. Presumably it’ll have to be competitive to prize people away from the more obvious VW motorhome route currently favoured by so many.

Of course, the other bonus with a camper van like the Ford Nugget is that there’s no tent to pack down, which can be a horrendous task when everything is soaking wet. Simply drop the roof down on the Nugget, roll the wheels off their leveling chocks and you’re ready to, um, motor home.