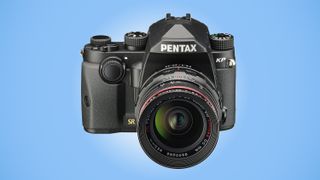 Ricoh Imaging, owner of the Pentax brand, is no stranger to releasing slightly modified versions of existing Pentax DSLRs.

Its most recent KP J, for example, was little more than a premium version of its KP (pictured above), while the K-1 Mark II was such a minor update of its K-1 predecessor that owners of the latter were able upgrade their existing K-1 bodies for a fee.

The model, spotted by ePhotozine, appears to have the same specs as the original KP, with a 24.3MP APS-C sensor, a five-axis image stabilization system and a weather-sealed body.

However, while the regular KP follows the norm of having an infrared cut-off filter in front of its sensor, the KP IR swaps this for a glass filter that admits infrared radiation to around 1100nm.

The sensors inside a typical camera are sensitive to wavelengths in both the visible part of the electromagnetic spectrum, and in the infrared region that lies just beyond this. To ensure that images are only captured using visible wavelengths, the convention is to place an infrared filter in front of the sensor to stop those wavelengths from getting through.

Removing the filter makes the camera sensitive to wavelengths in both areas of the spectrum, which gives the user the freedom to block one or the other by attaching a filter to the front of the lens. Ricoh claims that when a filter is used to block infrared radiation – thus letting through only visible light – performance will be almost the same as that of the regular KP.

So why no fanfare around the IR KP's release? Probably for the same reason that you won't ever get to use one – namely that the camera is aimed at "libraries, museums, research institutes, government agencies and other specialized institutions". So if you don't work for one of those, you're probably out of luck.

Additionally, the company has promised that an HD Pentax-D FA* 85mm f/1.4 will shortly be with us, while the GR compact camera line also received a new member in the shape of the GR III earlier this year.