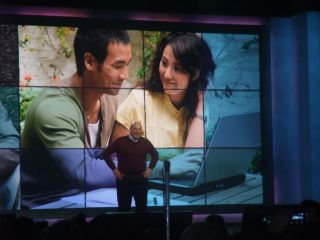 Windows 7? Where are the flying cars?

January is a big month for the tech sector: Apple does its annual - and this year, final - MacWorld keynote, while Microsoft kicks off the CES extravaganza with its vision of the future. 2009's efforts, though, hardly set the Web on fire. If we were to sum up the reaction in a word, that word would be "meh".

Despite Phil Schiller and Steve Ballmer's best efforts, Apple and Microsoft's keynotes were disappointing, even though both firms had some interesting stuff to talk about.

That's partly because key elements were missing - an Apple keynote without Steve Jobs is like a Radiohead gig with Thom Yorke replaced by the Chuckle Brothers, while Ballmer is much more entertaining when he's dancing - but it's mainly because technology keynotes are suffering from three very big problems.

Problem number one is that most of the big innovations in tech have already happened. The introduction of OS X or the iPhone was a very big deal.

A new version of iLife isn't so amazing. Similarly, Windows 95 and Windows XP were big steps forward. Vista wasn't, and Windows 7 is ultimately a better Vista.

The second problem is blogs. By the time Phil Schiller and Steve Ballmer stepped on stage, the internet had already discussed their keynotes to death - and more often than not, they'd taken various people's wish lists and presented them as fact.

As a result, expectations were so high that when Phil Schiller unveiled the new battery technology in the MacBook Pro, a genuinely interesting and important development, blog readers were bored.

Where, they asked, is the iMac made entirely of angels' tears, the iPod that doubles as a small family car and the iPhone that brings your ancestors back from the dead? This keynote sucks!

But the biggest problem is that while keynotes are annual events, innovation is an unpredictable thing. Innovation doesn't work to a timetable, and it couldn't care less about deadlines. Imagine if Leonardo Da Vinci was forced to do a keynote every January.

For the first few years he'd have been worshipped - the Mona Lisa! The helicopter! - but even Leonardo wouldn't have invented something amazing every year.

By year three he'd have run out of ideas, and he'd be spending two hours trying to get people excited about a rudimentary trouser press and a drawing of a small dog. It's a feeling we're sure Phil Schiller and Steve Ballmer can understand completely.