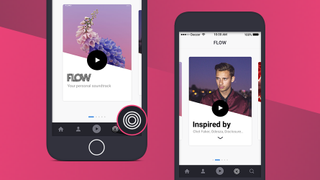 In the race to create the perfect music streaming service, Deezer hasn’t always led the pack: it’s created some neat features along the route, but so far there’s been little to differentiate the service from the half-dozen other services on the market.

But Deezer’s next feature, called Flow Tabs, could help widen the field a bit.

The feature basically combines the best of Deezer’s signature Flow music prediction algorithm and mashes it with Spotify’s curated artist spotlight playlists and Pandora’s custom radio stations, creating a hybrid of all three that allows you to pick from an artist-inspired playlist that still caters to your musical tastes.

The thinking here, according to Deezer’s Chief Content and Product Officer Alexander Holland, is to offer personalized playlists that account for varying moods and musical tastes.

In practice that means if one day you’re in the mood to hear some melodic R&B inspired by The Weeknd and the next you’re ready for high-octane rock from AC/DC, you’ll get custom playlists inspired by those artists that match your mood.

At the heart of the feature is Flow - Deezer’s trump card in the on-going music streaming war. It’s the brains behind the service’s music recommendations, and puts together ever-evolving playlists that gets smarter the more you use it.

Flow Tabs, the feature announced today, takes that all to the next level by allowing you to tailor those playlists to your mood - as the music prediction algorithm can only do so much to understand how you’re feeling.

While Flow Tabs might not be the ending salvo that puts Deezer on top of the other streaming services - a tall order considering some of Spotify’s cool new features - it’s one more way to help differentiate between the all-too-similar streaming services.