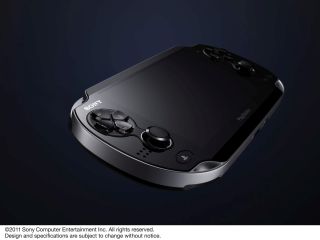 Sony has unveiled the Sony PSP2 – codenamed NGP for Next Generation Portable and we have already written it down on our wishlist and underlined it three times in red ink.

And, joy of joys, it also has two proper analogue sticks.

So without further ado, here are the official pictures of the device in all its glory.

Sony PlayStation - PSP2 - NGP - Next Generation Portable: we'll call it whatever it likes as long as we get to take it home and fondle its analogue sticks.

Sony PlayStation NGP: Looked at from straight on, you can see that the layout of the analogues, buttons and D-pad should make using it very similar to using a traditional PS controller - though your hands will obviously be further aprt to accomodate that gorgeous 5-inch OLED touchscreen.

PSP2 NGP-The OLED screen:The OLED screen is the literal centrepiece of the PlayStation NGP, offering OLED brightness, touch capability and a 960x544 resolution. It's likely to offer one of the best portable screens around - and its five inches in size.

Rear-mounted touchpadThe back features a touchpad - something we've seen on mobile phones in the past but now brought here to give an entirely new handheld user experience. Gimmick or useful addition? Time will tell.

NGP in hand: Thickness wise - the Sony PSP2 looks to be realtively similar to the original PSP back when it launched. This probably isn't going to feel comfortable in your pocket, but we're prepared to put up with this inconvenience...

Side on: The side view gives a proper view of the analogue sticks rather than nubs. The prominence of the buttons is also clear.

Underneath: This gives us a glimpse of the ports.