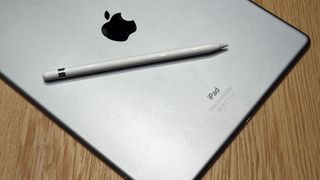 A future version of the Apple Pencil could be usable not just with the iPad, but also possibly with Mac computers, at least according to a new patent which has just been approved.

The patent, spotted by that font of all patent knowledge, Patently Apple, shows off a new possible design for the stylus whereby it can work with the Magic Trackpad and an iMac (and potentially, the trackpad on a MacBook laptop).

The rejigged Apple Pencil would use "electromagnetic signals from electrodes at the first end of the stylus" to translate scribbling on the trackpad to the screen, and it could also potentially work with simple in-air gestures.

For example, tipping the pen in a certain direction in mid-air could turn the pages of a document, or change to the next slide in a presentation. Or the stylus could be linked to an on-screen object, and turning the pen around would rotate said object.

Versatility for the win

In short, Apple is looking to make its pencil more versatile, and there are plenty of possible applications for such an invention.

Mac owners shouldn't get excited just yet though, as Cupertino files a very large number of patents, and most of those designs and concepts don't see the light of day.

Still, this is one of the more likely sounding ones to make the jump to reality. Another patent recently filed by Apple pointed to the possibility that a MacBook with an LTE modem is in the works. A potential issue with that is bunging in LTE would probably add a fair whack onto the price tag – and MacBooks aren't cheap as they are.

A revamped Apple Pencil, on the other hand, shouldn't make much impact on the asking price. Or at least you would hope not.