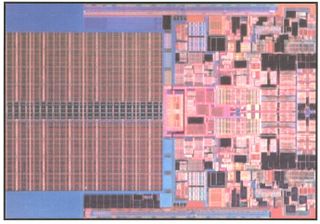 The first shots of a Penryn 45nm die.

Speaking to tech.co.uk on Thursday, Intel confirmed details of its die-shrink for the Penryn family of CPUs - the next generation of its Core 2 processors which will replace the phenomenally successful Conroe and Kentsfield chips later this year.

Two new fabs, in Oregon and Arizona, are ready to begin mass production of chips based on the 45nm process in the second half of 2007, while a third fab in Israel will come online at the beginning of 2008.

Reducing the size of the transistors from 65nm to 45nm is just part of the equation, though. Mark Bohr, a senior fellow at Intel, also confirmed that the 45nm chips will use a revolutionary new 'high-K' material - based on the element hafnium - to replace the traditional silicon dioxide transistor gate dialectric, along with two un-announced metals for the electrode.

It is the first company to use a high-K process commercially, which reduces leakage and increases the performance of chips over traditional manufacturing methods. Intel plans to release 15 chips based on the high-K process, and claims to have working samples of five of them already running in its laboratories.

The process means that the new Core 2 processors will have a transistor count of 410 million for the dual core desktop chips, compared with about 291 million for the current Conroe generation.

Furthermore, Bohr confirmed the power usage of the Penryn chips will not be reduced compared to Conroe, remaining at about 65W for dual core and 80W for quad core.

Instead, he told us, Intel will be concentrating on increasing performance and clock speed within the same thermal envelope. Finally, his colleague Steve Smith also confirmed that Penryn-based chips will feature the full SSE4 (Supplemental Streaming SIMD Extensions) instruction set, for better media streaming and 3D gaming performance.