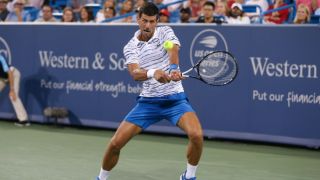 Into the last weekend at a 2019 Cincinnati Masters that has seen plenty of shock results, major outbursts and, of course, fabulous tennis. The great news is that you don't need to be stateside to catch all the action - you can live stream Cincinnati Masters tennis from anywhere in the world using this guide.

Cincinnati Masters 2019 - where and when

The Cincinnati Masters takes place at Lindner Family Tennis Center in, you guessed it, Cincinnati, Ohio, USA. It's running from Monday , August 12 until the finals on Sunday, August 18.

Play is scheduled to start at around 11am local time each morning. So that's 8am PT and around 4pm BST if you're watching across the Atlantic.

The $6+ million prize fund is looking pretty appealing right now to the players as they get ready for this tournament that, last year, saw Djokovic take the win over Federer in the final (sound familiar?). In the men's side of the 2019 tournament, the likes of Roger, Andy Murray and a very vocal Nick Kyrgios have all fallen, leaving Novak hot favorite to take two titles in a row.

Kiki Bertens was back to defend her crown on the women's side of the draw, but fell early to Venus Williams. Naomi Osaka has had some disappointing months in 2019 - now is the time for her to ramp things up ahead of her US Open defence later this month.

You can watch all the action from wherever you happen to be in the world using this handy guide. Read on to find out how to live stream the Cincinnati Masters from anywhere on Earth.

Live stream the Cincinnati Masters tennis 2019 from outside your country

So that's game, set and match for Express - but there are other fantastic VPN options out there as well:

1. ExpressVPN:  the best all-round VPN for streaming, comes with 30-day free trial and three months free with a one-year sub

How to watch the Cincinnati Masters 2019: US live stream

In the US both ESPN and the Tennis Channel will air the action.

If you're a cord cutter that wants to catch the tennis without signing up to a lengthy, expensive plan, you could always try one of these sports streaming sites. Many have free trials going for them, too:

Out of the US but still want to watch your home coverage? Then we'd recommend checking out our guide to the best US VPN and following our instructions above.

The best way to stream the Cincinnati Masters 2019 in Canada

In Canada the rights to all the tennis Grand Slams are owned by TSN, and the 2019 Cincinnati Masters is thrown in as well. So that means you can access this via your TV, online or on the TSN app if you have access to the service.

If you want to catch it but are out of the country, you can use a VPN to access the tennis coverage.

How to live stream Cincinnati Masters tennis in the UK

UK viewers can enjoy the Cincinnati Masters from a TV, tablet, phone and more thanks to the BT Sport 2 broadcast coverage and its accompanying app. That does mean you'll need to be a paying subscriber though.

There's also coverage on the official ATP app (costing from £9.99) or, this year, via Amazon Prime Video. Click here to get Amazon Prime now costing £79 per year or £7.99 per month (with the ability to cancel any time), and you can watch the tennis as well as access to Amazon's library of TV shows and films and unlimited one-day delivery on Amazon orders from the UK.

Not in the UK this week? Then don't panic, as downloading and installing a VPN as described above will let you watch via the above services as if you were back in blighty.

How to live stream Cincinnati Masters tennis in Australia

This year it's ESPN that will offer the Cincinnati Masters action direct to your TV, and via the app. That means you can enjoy the tennis on your phone, tablet or laptop on the move or via a smart TV or console for big screen action.