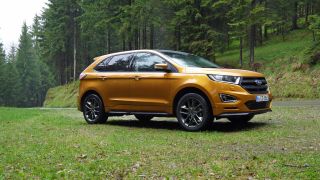 The Ford Edge has a certain aura about it. The oversized grille, wide stance and stretched rear light block – it's all very Land of the Free, Home of the Brave.

We're beginning to see American stylings filter into US firm's European models, and the new Ford Edge is a shining example. Ford is working towards a one model for all regions program, and while it's taken the company four years to get its larger SUV (it's bigger than the Ford Kuga) across the Atlantic, it's finally arrived – and it's been worth the wait.

Starting at £29,995, the Ford Edge goes up against some pricier competition including the Audi Q5, Volvo XC60 and BMW X5, and it aspires to match its rivals when it comes to the tech it's packing inside.

I jumped behind the wheel in Munich, and in the surrounding mountains, for a weekend drive to put Ford's family-friendly SUV through its paces.

Take a look around

The first thing you notice when you approach the Edge is its sheer size. It's a commanding presence: tall, wide and, well, American. The huge grille at the front, the 20-inch wheels and the elongated light block at the rear draw the eye in.

It may be a bit much for some, and I was a little taken aback at first by the brutish stylings, but you get used to the look – and the size – pretty quickly.

I got behind the wheel of the Titanium and Sport models, the upper two tiers of a three-model line-up; the entry-level Zetec completes the set. The Sport will set you back the most, but it's also the best looking of the bunch.

Colour-coded bumpers and skits, plus more attractive exhaust vents, make for a meaner look, but they are relatively minor cosmetic changes in truth.

Climbing (literally) into the Edge you're greeted by a spacious and comfortable cabin. Seats are generous and supportive, while the back row can easily accommodate three adults, let alone 2.5 children.

Moving into the boot there's an enormous amount of space – 600+ litres in fact, which will comfortably fit even the biggest of family pets. There is space here for an additional couple of seats, Land Rover Discovery-style, but Ford opted against the seven-seat configuration; space and comfort are the aim of the game here.

While Ford is looking to unify model design across the world, that doesn't mean we're getting exactly the same car that hits the roads in the United States.

The European SUV market demands a higher level of finish, and Ford has packed the Edge full of premium tech to bring it up to speed with the continent's requirements.

This includes a stereo system from Sony (which can be upgraded to a thumping 12-speaker arrangement, for a price), an 8-inch touchscreen in the centre console, and handy features such as Ford's Sync 2 interface with Bluetooth support for your phone, USB ports, SD card slot, AUX input and a proper three-pin plug socket accessible from the rear seats.

Even more tech can be crammed into the Edge if you're feeling flush, including blind spot indicators on the wing mirrors.

These consist of an amber LED in each mirror, which illuminates when the car detects another vehicle in your blind sport. It's simple yet effective – and it's especially useful when you're driving a car as big as the Edge.

The satellite navigation (another optional extra) is also worth shouting about. It's one of the better in-built offerings, with clear mapping and lane assist, and ensured that I was able to work my way through the unfamiliar streets of Munich without issue.

There's a digital display in the instrument cluster too, showing you the next turn/instruction, allowing you to spend more time looking at the road and less time glaring at your centre console.

Heading out onto the road, the Ford Edge feels like it completely fills the lane. My immediate reaction was "this car is wide, really wide" as I crept through the busy streets of Munich.

Looking ahead at the fleet of other Edges in our convoy, though, it was clear that it was nowhere near as lane-filling as I felt it was. This is a big car, no mistake, but after a couple of hours I adapted to its size, and the light steering meant the Edge was easy to navigate around the German roads.

The auto can see 0-62mph in 9.4 seconds, which isn't too shabby for a family SUV, and it makes a pleasing rumble as you press the pedal to the metal.

Inside the cabin, Ford is keen to point out that the Edge is one of the quietest rides around. That's thanks to the built-in noise-cancelling technology, with your only visual clue to the tech being the trio of button-like microphones attached to the roof liner.

Much like noise-cancelling headphones, these mics can pick up unnecessary noises and drown them out, to a point. Ford has also included laminated acoustic glass to reduce outside noise, and has engineered the engine layout in such a way as to keep disturbances from the front to a minimum.

So does it work? The Edge certainly wasn't loud, but I can't say the noise-cancelling smarts were immediately noticeable – until, that was, I returned home and got in my own car. After several days of cruising round in the Edge, getting back into my Corsa I noticed an audible difference.

You're not going to get silence – and anyway you wouldn't want to totally drown out the pleasing rumble of that two-litre engine – but Ford has managed to reduce the sound inside, which is always nice.

Ford has taken its time getting its larger SUV to Europe, and while rivals now have established models already in circulation the Ford Edge makes a compelling, if late, entry into the game.

The drive is solid, the cabin is exceptionally comfortable, and the range of tech on offer is especially pleasing – even if you do have to dip into your pockets for a few of the extras.

If you're looking for a new family car with bags of space and a decent range of tech, the Ford Edge fits the bill – and it's cheaper than some of its main rivals.