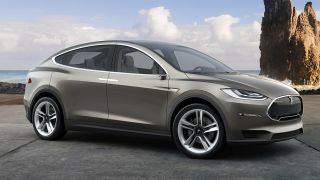 Anyone wanting to spend a small fortune on an electric car, but dissatisfied with the size of the Tesla Model S, will be thrilled with Elon Musk and Co.'s next move.

The next car to roll into Tesla's showrooms will be the Tesla Model X SUV and orders are now open for Australians.

While the car's design and specs are yet to be finalised, Aussies keen to make sure they don't miss out can now put down a $6,000 deposit to reserve one.

Where are the ladies?

Tesla also hopes the Model X will see an upswing in the number of women investing in the brand, with sales thus far skewing heavily towards the male demographic according to spokesman Heath Walker.

"The people that read your press in terms of motoring and tech tend to be more male-skewed and they tend to be usually the ones who are on the cusp of new auto and tech news.

"But we're starting to see a slight tip of the scales. It's probably not the best indicator but I tend to use our Facebook audience as a measure for that and also our purchase data, and it's starting to tip."

According to Tesla, the Model X "combines the space and functionality of a seven seat sport utility vehicle with the uncompromised performance of a Tesla."