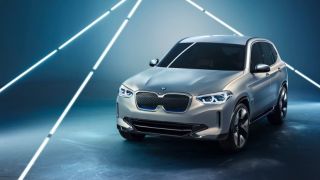 BMW used the Beijing Motor Show to announce the iX3, the company’s first fully electric SUV that will be mass produced starting in 2020.

The world-saving vehicle will have 270 horsepower and BMW estimates that it will get around 250 miles of range on each charge of its 70kWh battery pack.

The BMW iX3 will be based on the design of the X3 compact SUV you see on the road today and will be able to go much further on a single charge than the manufacturer’s first attempt at an all-electric car, the BMW i3, which maxed out at 113 miles.

BMW used the Beijing Motor Show as the venue for an important reason: It’s choosing China as the country where the BMW iX3 will be produced - the first major export from BMW's Chinese manufacturing site.

Do Automakers Dream of Electric SUVs?

Add Jaguar’s new I-Pace, the Audi Sportback, Mercedes EQC, Porsche Mission-E Concept and Tesla Model Y, and you could be looking at a pretty vast selection of electric SUVs by the end of the decade.

Does Tesla have what it takes to keep pace with all these new challengers to the fully electric throne? That all depends if production woes continue...