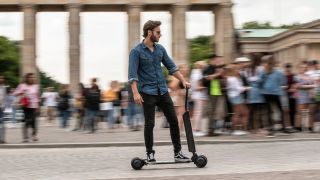 Audi's first all-electric car, the E-tron, is due to hit the streets in 2020, and the company has announced that it will also be releasing an electric scooter to complement it for shorter trips.

The E-tron Scooter is distinctly odd-looking, with four wheels rather than the usual two and a broad deck that allows riders to stand side-on, skateboard style. It's a bold design choice, but one that makes a lot of sense; electric scooters are tricky to balance on, and having four wheels solves the stability issues that can lead to crashes and parked scooters toppling into the streets.

As The Verge reports, Audi compares the E-tron Scooter experience to 'surfing a wave', as you cruise along the street, steering with one hand and signaling turns with the other.

Smooth surfing comes at a price, though, and Audi isn't planning to take on the likes of Lime, Bird and Lyft with an affordable scooter sharing service. The E-tron Scooter is for private purchase only, and is expected to retail at €2,000 (around $2,200, £1,800, AU$3,300).

For context, the newly announced Bird Two scooter (which Bird itself modestly compares to the Ford Model T) will set you back a relatively bargainous $1,299 (about £1,000, AU$1,900).

If you decide to invest in one of Audi's new electric cars, you'll be able to charge the scooter directly from its battery, and you may even be able to add one as an optional extra when you place your order.

With such a high standalone price, that might be the most likely route to E-Tron Scooter ownership. For style-savvy commuters, the Cowboy electric bike is almost identically priced, offers over three times the range on a single charge, and (sorry Audi) looks far, far cooler.