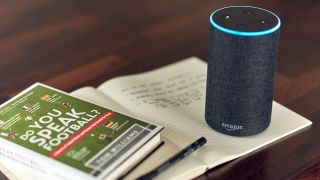 The World Cup, the greatest sporting event in the calendar, kicks off in Russia tomorrow night. But if a summer of football fills you with the dread of hundreds of awkward conversations about players you've never heard of applying tactics you don't understand, rest easy: Amazon has you covered.

It's Alexa voice assistant, as found in its Echo speakers and smartphone apps, has been updated to help even the most football-phobic bluff their way through the tournament.

You'll be able to ask Alexa trivia questions, like the year England won the World Cup, to more specific questions, like what a "false nine" is or info on Brazil's Roberto Firmino.

And, if you just want a daily rundown of everything you need to blag your way through a conversation on a day-by-day basis, just ask "Alexa, how do I bluff my way through the World Cup" for the latest info you need.

While Amazon has hundreds of questions around football and the World Cup that Alexa can answer, it's suggested kicking off with the following:

TechRadar is going football mad this summer, with a host of features looking at the intersection between technology and football, and how gadgetry and gizmos can make the beautiful game more beautiful, and you a more graceful player. Check out our World Cup tech hub for more.