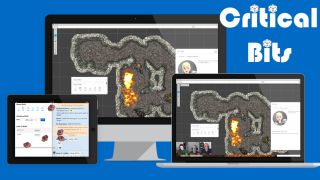 So, you’ve likely arrived here after watching a rip-roaring episode of Critical Role or some other game of Dungeons & Dragons (D&D) on Twitch. If looking to get into this incredible, addictingly (seriously) creative hobby the easiest way possible: the almighty internet is your ticket. And, luckily for you, I’ve just decided to start a regular column on that very topic.

It’s like the goddess of fate is watching us … or something – or, it’s just a coincidence. Yeah, a ‘coincidence’. At any rate, I want to help you get into this amazing game either as a player or a Dungeon Master (or a Game Master, if you’re playing a different kind of tabletop game) in the same way I did just two short years ago.

Yes, I’m a bit of a ‘newb’. And, yes, I live my days in regret that I hadn’t dove into this glorious game sooner, with more time and fewer worries on my hands.

However, I’ve learned an incredible deal about – and developed a possibly dangerous addiction to – the game these past years, running concurrent campaigns as Dungeon Master both online and at a table … but mostly online. And so, that’s where I’ll start this journey of waxing philosophic about how my favorite pastime and technology, collide.

This first entry is for everyone who just learned what D&D is all about and want to get in on the ground floor through the mighty power of the internet – because, while it isn’t any better or worse than playing around a table made of wood and metal, it’s sure as the Nine Hells different.

For you folks already pretending to be dwarves on the Internet for three hours a week, I’ll have plenty of topics to cover concerning you in the coming weeks – just sit tight. But hey, you might learn a thing or two anyway, so read on.

Get a decent webcam and microphone

Part of the beauty of D&D is that it can cost literally nothing to get into: you just show up to a friend’s basement, you’re handed a sheet with several fields to fill in and a pencil to do it with.

However, this is not necessarily the case in an online D&D game. While all you really need is a Skype account or Gmail address and a computer with an internet connection (even the webcam is optional!), there are simply more points of friction between your performance as a dwarf and how well your friends (and their characters) receive that performance, much less hearing or seeing basic communication.

Namely, those friction points come down to video and audio. So, here’s how to nip those potential trouble makers in the bud:

When it comes to webcams, if you’re playing on a Windows desktop or laptop, I suggest the Microsoft LifeCam HD-3000 (pictured above). It’s the webcam I personally use, and my players have often balked at how clear my video appears on their end compared to theirs. That’s exactly the kind of quality that’s going to make emoting in character from behind a screen that much easier.

On a Mac? Unless you’re using one of the 12-inch MacBooks, you should be fine. Apple generally produces quality webcams in both its desktops and laptops.

As for microphones and headphones, I’ll first recommend my favorite USB microphone (for Mac and Windows) for the player or Dungeon Master (DM) who wants a next-level experience: the Blue Yeti. It’s pricey, but you’ll get podcast-grade audio output from this thing. Clear audio makes it that much easier for your fellow players to suspend their disbelief.

However, this doesn’t account for inbound audio. So, I’ll kill two birds with one stone in recommending a fine headset for both Mac and Windows that produces quality audio both outbound and inbound: the SteelSeries Arctis 3. This headset is lightweight enough to wear for those lengthy online D&D sessions, and with full sound to boot, but also produces audio that my players have reported to be loud and clear.

Regardless of how you kit out, just don’t come to your first game of D&D (or any other kind of tabletop game) online without suitable equipment – it’ll only make the game better for you and your fellow players.

Treat the game like a (super fun) conference call

When you’re heated, in the moment, with your disbelief suspended AF, you want to express yourself, or your third level half-elf sorcerer’s self, and no one can stop you! You’re right – after all, what else are you here for?

Sure, at a table, where our ears can (sometimes) hear and understand multiple voices at once – what we call crosstalk in the media world – it’s fine, but it’s a bane of many an online D&D game. When you can’t get a word in edgewise because of the limitations of technology (and, honestly, human empathy), such an amazing game becomes a lot less fun.

Besides, why do you think news anchors and expert panels on TV shows never talk over one another – well, let’s ignore CNN – on air? Because it’s much harder for people to follow multiple voices at once from the same source of audio than that is in the real world. Why do you think dialog in TV and movies is always so singy-songy?

Not to mention the inherent delay in most audiovisual communication methods online! Between the two, developing a mutual respect of one’s “air time” during an online D&D game is crucial. Nailing the timing it takes to maintain the fun, witty banter that can make your fantasy characters come to life will take, well, time. But, your games played online will be that much better for it – plus, the skill well applies to games at the table, too.

For some examples for how it’s done well, just watch any well-produced live D&D game on the internet, like the aforementioned Critical Role or Dice, Camera Action! from the creators of the very game.

Resist the urge to use the internet

Look, it’s bad enough that we Dungeon Masters have to compete with the bingeable, plentiful sources of fantastical entertainment that have arisen alongside the propagation of streaming and mobile technology at the table.

To have to compete with the instant gratification of the internet that’s so much easier to do in secret from behind a screen … that’s just brutal.

I know, playing a game through a web browser service like Roll20 makes the temptation even worse. After all, when it’s not your turn, you’re just one click away from Facebook or Reddit or – gasp – the Monster Manual. (That last one we might chew on another time.)

Here’s the thing: your fellow players put aside three or so hours of their week to experience what your DM has likely put many, many more into creating to play with for those three hours. So, they all deserve your undivided attention as much as you deserve theirs.

When you take multiple peeks at Facebook or whatever else, whether it’s on your phone at the table or on a browser tab from behind the webcam, while your game is going on, you’re not contributing to what makes the collaborative element of this kind of game so incredible. And, yes, being an attentive audience when the moment warrants it is part of that, too.

Bonus: Can't convince your friends to get online and play? Then sign up for the Roll20 online tabletop gaming system (my personal favorite), and use their system for public game postings. Fantasy Grounds, a competing client-based system, has a forum for finding people to play with, too.