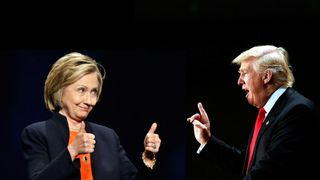 It’s almost over… finally. The 2016 US Presidential Election campaign has been long and at times exhausting, with controversies and surprises coming thick and fast as the two nominees, Republican Donald Trump and Democrat Hillary Clinton, battled for the White House.

The stakes are high, and while Hillary Clinton has maintained a lead in the polls, that advantage has narrowed in the past few days.

As the USA chooses its next President the rest of the world will be looking on in interest, and if you’re eagerly awaiting the outcome of one of the most important Presidential elections in years we’ll show you how to follow the results as they come in, no matter where you are. So read on to find out how you can keep up live with the 2016 US Presidential election results.

What do the candidates need to win the 2016 US Presidential election?

Donald Trump and Hillary Clinton need to win 270 Electoral College votes to win the White House, and each US state has a set number of electoral votes based on its population – California has 55, for example, while Washington DC gets just three.

Most states vote rather reliably – either traditionally Republican, or traditionally Democrat, so we have a good idea of how they're going to vote this time.

That means a lot of attention is going to be focused on the swing states, such as Ohio, Florida, Iowa, North Carolina, Virginia, Nevada, Colorado and New Hampshire, which could tilt either way. How these states vote will likely determine the outcome of the election.

Donald Trump will need to win almost all of them to become President, while Hillary Clinton only needs to win one or two – for example Florida, which has 29 electoral votes.

This is because the Democrats have more states with more electoral votes that can be relied on to vote Democrat every election (such as California).

If you’re following election night on the internet there are plenty of websites that will be keeping tabs on the results.

Politico has a particularly impressive 2016 Presidential Election Results website, with a countdown until the first polls close, a list of the electoral votes won and a live map showing which states have voted.

The website FiveThirtyEight is another essential resource to check during election night, as it breaks down and analyzes huge amounts of data, and presents it in easy to understand graphs to help you follow the twists and turns.

Google is also a great way of keeping track of results and breaking news of the 2016 Presidential Election with its Google Trends website, which not only shows predictions based on search results, but offers loads of information on the candidates, and live election results.

The Guardian also has a live blog that will be running throughout the day and night, with reporters stationed across the US.

CNN, the BBC and Fox News will also be reporting on the election, with interactive results pages, live-streaming video and more.

If you’re not sitting in front of your computer watching the results there are a number of apps that will alert you to breaking news, and send the latest polls and results straight to your smartphone.

The Guardian app for iOS and Android has been updated specially for the 2016 US Presidential elections, to give you the results on your lock screen.

If you're in the US you can open the app and a screen will appear asking if you want to sign up for the 2016 US Presidential election result alerts. This screen should also appear for people outside the US; if it doesn't, make sure you have the most recent version of the app, then go to Settings > Alert in the app and turn on 'Live US presidential election results alert'.

The NPR One app for Android and iOS brings you the 2016 US Presidential election results in podcast-style news bites, so you don’t have to sit staring at a screen to get the information you need.

Going by viewing figures for previous Presidential elections, NBC is the channel to watch, with its 2012 election results coverage averaging 12.1 million viewers.

Fox News, ABC and NPR will also be covering the results live, with special guests and experts in the studio helping to pick apart the results.

Meanwhile, the BBC and Sky News will be covering the election results for British viewers, with presenters in both the US and the UK.

What are the key times to check for updates to the US Presidential election results?

The polls will begin to close at 5pm CT (6pm ET, 4pm MT, 3PM PT, 11pm GMT, 9am Wednesday AEST), and the results of exit polls will start coming out pretty soon afterwards as the polls close in each state, which should give us an idea of where the election is heading.

At 6pm CT (7pm ET, 5pm MT, 4PM PT, 12am GMT, 10am AEST) things will start to get exciting as the polls will close in three key swing states: Florida, Virginia and New Hampshire. The swing states may take longer to call, especially if the race is tight.

The swing states of North Carolina and Ohio, as well as reliably Republican West Virginia, will close their polls at 6:30pm CT (7:30pm ET, 5:30pm MT, 4:30PM PT, 12:30am GMT, 10:30am AEST). Half an hour later the polls in the swing state of Pennsylvania close, as do the polls in Indiana, which includes Vigo County – the county has voted for the winner of 30 of the last 32 Presidential elections, so that could be an interesting result to watch out for.

The swing states of Wisconsin and Colorado (as well as Arizona, which tends to vote Republican but which some observers think could go to the Democrats this time), close their polls at 8pm CT (9pm ET, 7pm MT, 6PM PT, 2am GMT, 12pm AEST).

Nevada and Iowa will be the final swing states to close their polls, at 9pm CT (10pm ET, 8pm MT, 7PM PT, 3am GMT, 1pm AEST). The polls also close in Pennsylvania then – and if Trump wins there, it could spell trouble for Clinton.

Of course other states will close their polls and declare their results throughout the night, but those key swing states should give us an idea of who will win the 2016 US Presidential election.