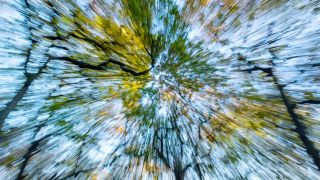 When almost every location has been photographed thousands of times before, photographers are increasing looking for ways to create unique images they can truly call their own. And that’s exactly where the in-camera movement technique comes into play to create images of both the familiar and indeed the unfamiliar, that are a one of a kind abstraction.

Intentional camera or in-camera movement images (ICM) are simply images where you shoot at a slow shutter speed and move the camera and/or lens during the exposure. The movement itself could be vertical, horizontal, circular or even a rotation of the zoom ring of a zoom lens to change focal length during the exposure.

The result of this technique is dynamic and abstract images that look fantastic straight from camera. And with this quick and easy guide, you’ll be able to explore these different movements and create your own eye-catching ICM images in just a few minutes…

Here are three commonly applied camera/lens movements that will provide great results. Use these as a starting point using the camera settings below for guaranteed results.

A zoomburst is achieved by zooming into the subject and then zooming back out during the exposure. The central part of the scene often remains the most recognisable, while the outer areas become a rush of blur that appears to jump out of the image. This technique can be used to add a sense of movement to a wide range of subjects.

This type of ICM is often used with scenes where there’s a vertical element such as trees or reeds and is just a short sharp movement of the camera during exposure. A variation of this is the horizontal pan, which is commonly used to shoot abstract images at the coast using the horizon line out to sea as the focal point.

The camera rotation is different from the others in that you shoot ‘blind’ with the camera held up to your chest. Rotate the camera to the left as far as is comfortable and autofocus before rotating the camera and releasing the shutter. This technique requires an extremely smooth pan and may take more attempts than the other methods.

These settings will give you guaranteed results regardless of the type of in-camera movement you’re intending to use. As you gain confidence and experience using this technique you can begin to experiment more with even slower shutter speeds, but before that it’s worth perfecting your ICM technique with the following settings.

This technique, apart from rotation, can be performed with the camera attached to a tripod to eliminate the risk of blur on the opposite axis to the ICM eg. when shooting a vertical pan, you don’t want horizontal movement and vice versa. It is easy to shoot handheld, and Image Stabilisation is useful if your camera or lens offer it, but if your images are suffering from too much blur you may find that tripod mounting your camera resolves the issue.

These settings will guarantee great results every time. Set your camera to shutter priority with shutter speed set to between 1/8 sec and 1/15; use 1/10 sec as a starting point and adjust as necessary. Set ISO to 100 and the camera will take care of aperture for you. Take a quick test shot to assess exposure and add any exposure compensation as necessary to lighten or darken the image. Use the histogram to ensure shadows and highlights aren’t clipped.

This is the most important part and determines the success of your images – smooth, steady movement of the camera and lens is essential. Autofocus on the subject and keep the shutter button depressed halfway to lock focus and move the camera or the zoom ring into the start position for the movement. Next, begin the movement and a split second later release the shutter while continuing the movement until after the shutter has closed.

Working with a shutter speed ranging between 1/8 sec and 1/15 sec, you have to make sure that the movement of the camera is the right speed for the shutter speed. In the first image, you’ll see that the movement blur is extremely short. While in the second image the blur is much longer resulting in a more aesthetically pleasing and abstract image.

Getting the amount of camera/lens movement right is simply a case of trial and error, which is also the basis of the technique as a whole. Expect to shoot many more frames than usual to get that one image that you like – it may sound laborious, but it’s definitely worth the effort and you’ll see the results immediately on the camera LCD screen.

With instant results and a dynamic abstract feel, ICM images are both fun and rewarding for beginners and more experienced photographers alike. And while the examples here focus on the natural world, the technique can be used for a wide variety of subjects including portraits and action.

Like many things on photography the possibilities are almost endless, and the only limitation is your imagination. So, head out with these camera settings and simple camera movements to shoot your very own one of a kind images.