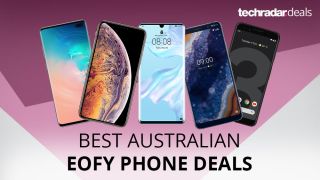 Australians love smartphones, but it's no secret that new handsets can be pretty expensive, with brands like Apple and Samsung now happy to exceed the $1,500 mark (or in the case of Apple, the $2,000 mark) for their top models.

Of course, you don't always have to pay the full ticketed price – with the Australian business year coming to a close, there are bound to be some fantastic end of financial year (EOFY) sales offering discounted prices on the best phones of 2019.

That said, purchasing a new smartphone, even a discounted one, will still set you back a fair chunk of change. That's why it's important to find the right phone for your everyday needs.

Whether you're looking for a mid-range handset or a more premium model, we'll be here this EOFY 2019 to track down the very best discounted options for you.

Want to score a great laptop deal or other tech bargain? Check out our other EOFY 2019 deals roundups below.

You don't have to wait till June 1 to buy that smartphone you've had your eye on. Some retailers have already started lowering their prices on some of the best flagship devices currently on the market – here are some of the best outright prices we've found so far.

Want a stunning Galaxy Note 9 without paying the full Australian retail price? Amazon Australia is selling the international version of the handset in Midnight Black for only $911. Worth noting: the listing states that it's only covered by a 12-month warranty.View Deal

Just like the previous deal, Amazon Australia is selling the international version of the handset in Ocean Blue for only $899.99. Worth noting: the listing also states that it's only covered by a 12-month warranty.View Deal

Amazon Australia has an excellent deal on the 128GB Samsung Galaxy S10e in Prism Green, with the handset priced at only $899 - that's $300 less than the RRP. And, as this is an Australian Model, it also comes with a 2-year warranty.View Deal

The same brilliant deal is also available for the 128GB Samsung Galaxy S10e in Prism Black, with Amazon pricing the device at only $899 - that's $300 less than the RRP. Like the handset above, this is an Australian Model, meaning it also comes with a 2-year warranty. View Deal

Like with the Prism Green and Prism Black handsets above, Amazon's deal extends to the 128GB Samsung Galaxy S10e in Prism White, priced at only $899, which is $300 less than the RRP. Again, this is an Australian Model, so it comes with a 2-year warranty. View Deal

In a deal that almost seems too good to be true, the Aussie retailer Becextech is offering the 128GB version of the Samsung Galaxy S10 Plus in Prism Black for only $1,099 – that's a saving of almost 30% from the site's previous price!View Deal

Becextech has a great deal for iPhone lovers too, this time for Apple's newest flagship, the iPhone XS. The site is offering a 12% discount on the 64GB Space Grey version of the handset, bringing the price down to $1,504.View Deal

Until the V50 ThinQ, the V40 was LG's best phone. It packs excellent specs and incredible 32-bit Hi-Fi Quad DAC audio. If that sounds up your alley, Amazon has the phone listed at the terrific price of $793.56 – a substantial discount on the device's $1,299 RRP.View Deal

Looking for a phone that takes amazing photos? The Google Pixel 3 will surely fill that need. Becextech has an excellent deal on the 64GB black model that brings the price down from the usual AU price of $1,514 to just $1,044 – that's a saving of 31%!View Deal

Features to look for in EOFY phone sales

The first big thing you'll need to decide is whether you're after an Android handset, or would prefer to hitch your wagon to Apple's iOS ecosystem.

There are a huge number of Android handsets on offer from several major manufacturers, which all generally have their own strengths (and occasional weaknesses). That means there's a lot more choice for those who want to embrace the customisation and freedom that Google's mobile OS is known for.

On the other hand, Apple's iPhones, while more closed-off in nature, are excellent options for those who prioritise predictability and want to ensure they get the latest OS updates as as soon as they're available. They're also ideal for those who already own Mac computers and subscribe to Apple's various services.

Depending on how much you're willing to spend, Android phones offer varying degrees of performance, with top handsets like Samsung's Galaxy S10 and Huawei's P30 Pro offering plenty of grunt under the hood thanks to their top-of-the-line specs.

When purchasing a new handset, it's important to find out if its chipset is powerful enough to handle your daily tasks. At present, the Snapdragon 845 chipset is what you'll find in most top Android models, barring those from Samsung, which use the Korean company's own Exynos chips in Australia. You’ll find that, among the Snapdragon and Exynos chip families, the more powerful the processor, the higher the model number.

Apple's iPhones, on the other hand, often pack a similar amount of horsepower depending on which generation of device they belong to. Apple's own A12 Bionic chip powers its most recent iPhone XS and XR models, which should guarantee terrific performance for at least a couple of years. After that, you may start to notice some slowdown.

Most manufactures will offer their handsets with various amounts of onboard storage. Depending on what you want to do with your phone, you'll want to settle on a storage size that's right for you. Smartphone storage can range anywhere from 16GB to 1TB, though you can expect the price to rise significantly as that number gets larger. Many Android phones will offer expandable storage via microSD card slot, meaning you can add more capacity should you ever need it.

Without question, the best kind of display you can get is an OLED, as it offers deep blacks and individually-lit pixels, allowing for always-on-displays that consume very little battery due the majority of the screen being off. They're also incredibly vibrant, with vivid, organic colours that really bring videos and games to life.

Various types of OLED displays are featured in most top models, including the Samsung Galaxy S10, iPhone XS, Huawei P30 Pro, Google Pixel 3 and more. Some of the more affordable options, however, still opt for LCD displays, and while they aren't quite as impressive when it comes to vibrancy and contrast, they do tend to offer excellent brightness.