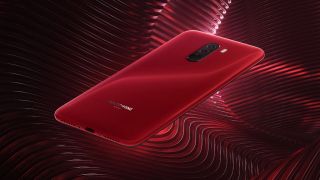 Although Pocophone has only had one device, the brand that is part of manufacturer Xiaomi has proved pretty popular so far and it seems another handset is in development now.

That news comes from Pocophone's head, Alvin Tse, who posted on Twitter "You will hear more from POCO in 2020". That means Pocophone as the company released the F1 as the 'Poco F1' in some parts of the world.

Fans of budget smartphones will rejoice, because the Pocophone F1 was a pretty impressive budget phone, at least as debuts go, thanks to its dual rear cameras, big battery, and fast charging.

The anticipated Pocophone F2 could build on some of these features with all the new tech from the past 18 or 24 months, depending on when in 2020 the phone launches.

And then it's gone

Tse's tweet was pretty quickly deleted after being posted – this could mean a variety of things, but you should take the original news with a pinch of salt.

It's possible that his information was incorrect, and in fact there isn't anything coming from Xiaomi's Pocophone anytime soon. Since Pocophone and Redmi, another Xiaomi owned brand, seem to have quite a similar purview in making similarly-priced budget phones, Xiaomi could have seen them as too competitive, and discontinued the former.

We wouldn't expect this to be the case, as it would be odd for a tweet from an important figure in the company to be totally wrong. Perhaps it's not a smartphone, though, and the tweet was deleted as speculation was all phone-centric.

The deletion could also be intended to cool down speculation into the existence of a Pocophone F2, whether that's to reduce the amount of early hype or reduce the risk of any leaks. Clearly that didn't work, however, as we're reporting on it.

It could also be that Pocophone or Xiaomi are planning a launch very soon, and don't want Tse's unofficial confirmation to overshadow the actual announcement.

If that's the case, we could see the new budget flagship very soon, and we'll report on it if and when it does get announced.