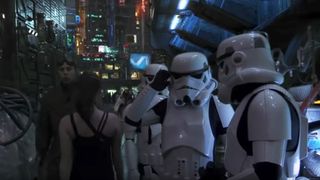 Test footage of the canceled Star Wars TV show Underworld has surfaced on YouTube. The show, which George Lucas apparently wanted to be 100 episodes long, was first discussed after the release of Revenge of the Sith in 2005, and was officially put on hold in 2010 due to budget restrictions.

It shows Star Wars as you've never seen it before: a Blade Runner or Cyberpunk 2077-esque vision of Coruscant with bright lights, flying cars and an underground resistance movement forming against the Empire. With citizens going to desperate measures to stop the Empire, it might also remind you a little of Saw Gerrera's fighters in Rogue One.

There's roughly five minutes of test footage and five minutes showing how the short show was made. This was likely created as a proof-of-concept – the effects studio mentioned above, Stargate, has worked on everything from the Jennifer Lopez movie Hustlers to ABC show The Walking Dead.

Polygon points out that it's actually been on the Vimeo page of effects studio's Vimeo page for nine years – but this is the first time most people have seen it. Both the test footage and making of footage have been removed from Vimeo in the meantime, so it's possible this won't remain on the internet for long.

It's rumored that 50-100 scripts were written for Star Wars: Underworld, and you can see why the TV landscape of the late 2000s wasn't ready for a show like this. It looks very expensive, and this was from the era before 'Peak TV', where TV show budgets would escalate in an arms race between streaming services and traditional networks.

It's a very different proposition to something like The Mandalorian, which even with its quieter adventures on mostly empty planets, reportedly costs $15 million an episode. So the idea of anyone making 50 episodes of a show set in a cyberpunk world to this standard feels unlikely even now.

After Disney bought Lucasfilm, talk of Underworld mostly went away. The acquisition coincided with the cancelation of third-person shooter Star Wars 1313, which would have explored a similar part of the universe.

The show would have featured Emperor Palpatine in some capacity, according to a 2016 interview with God of War's creative director Cory Barlog. The scripts for Star Wars: Underworld actually helped inspire that game, largely considered one of the greatest blockbusters of the past generation.

So, at least Underworld's demise wasn't entirely in vain.