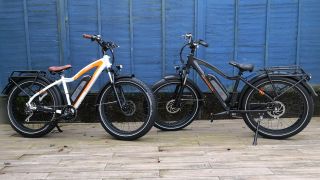 It’s tempting to shout out ‘poweeeer’ in Jeremy Clarkson fashion as you breeze effortlessly along on one of Rad Power Bikes' latest additions to its growing fleet. Meet the RadRhino; actually two e-bike models with the same name, many similarities and one big difference – the hub motor.

TechRadar has already sampled the delights of Rad Power Bikes heavyweight and cargo-esque RadWagon. That’s like the HGV of e-bikes and as a result can carry you, someone else and a week’s worth of groceries too. The RadWagon is quirky, has its place and certainly turns a few heads as you trundle down the road, but the duo of new RadRhinos takes things up a notch or two.

The RadRhino is a slightly different machine and a tad more refined. With the thicker wheels and big chunky tyres it’s essentially an electric fat bike. The fat bike is a fairly recent phenomenon with traditional frame designs beefed up to house big and bulbous tyres. The idea kind of works as those wider tyres let you cycle on softer terrain, such as sand, but the trade-off is they’re quite bulky to pedal around.

Fat bikes are therefore fine on flat terrain, but not so good on hills. Nevertheless, they’re still very cool to look at. Rad Power Bikes RadRhino addresses this debilitating downside of the fat bike by adding in battery/motor power and generous amounts of it to boot.

There are two models of the RadRhino, with a 250w motor edition and a much beefier 750w number. So, you get the big fat tyres, but none of the sweat-inducing stress when you’re pushing down on the pedals thanks to battery assistance when it’s needed.

So, which one to choose? Rad Power Bikes suggests that the 250w motor model is well suited to commuting, while the more powerful 750w edition is ideal for off-road duties. We’ve been comparing the two and there are pros and cons for each.

The 250w model is a more straightforward option as, although it features a twist power assist, which gives you more assistance like a scooter, there’s no requirement to register it (in the UK, at least – rules will vary depending on your country and region) and you don't need to have additional insurance or a driving licence. Rad Power Bikes reckons it’s good for a range of 40-72km on a charge.

Meanwhile, the 750w model is capable of similar range and can get up to 25kph. However, depending on where you’re going to be riding it, the e-bike might require L1e-A (powered cycle) registration. You’ll also need liability insurance and a driving licence. Again though, the specifics will depend on your location.

Rad Power Bikes suggests that the 750w model is best registered, though it points you to a UK Department for Transport document that's rather convoluted in its explanation (and at the time of writing is temporarily unavailable). If you’re looking for a simple solution we’d suggest making do with the 250w model.

Getting your hands on either one of these things is easy enough. Simply place your order, depending on whether you live in the UK or mainland Europe (the RadRhino isn’t currently available in America, but other models in the range are).

Soon after, a delivery driver turns up with a very large box. Inside, your RadRhino is about 90% assembled, so there are a few bits and pieces to finish up prior to taking the fat bike for a spin. The biggest challenge at this point is hauling it out of that ginormous box.

Final assembly of the RadRhino is actually very straightforward. An Allen key covers most of the smaller tightening up issues, such as putting on the handlebars and fastening, along with positioning the front mudguard and light assembly. The front wheel is a quick-release affair, so that’s popped in quick-sharpish too.

You might get a bit of binding if the front brake disc is too tight, but that can be adjusted with said Allen key anyway. A spanner to fix and tighten the pedals and you’re good to go.

Well, not quite, as you’ll need to fully charge the battery first. The RadRhino comes with its own battery charger, as well as a toolkit and basic manual. You can get answers to technical queries and an overview for any setting up and maintenance issues via videos on the Rad Power Bikes website by the way.

Our bikes were pretty much charged when we took delivery, but it’s good practice to top them up prior to going anywhere. Looking after your e-bike battery is prudent as these can be the priciest things to replace on a powered cycle. A sizeable €599 in fact.

Of course, Rad Power Bikes has a range that is up against plenty of competition. However, perhaps one of the real bonus points behind something like the RadRhino is the value.

Sure, some components might have been manufactured in China and are perhaps a little cheaper as a result, but there is plenty of quality here too. The bikes come with Shimano groupsets, which cover all of your gear changing and general pedal-powered aspects of the experience, and that's good news indeed.

Similarly, there are touches that add a quality edge to proceedings. Those Kenda tyres, for example, have been specially developed and offer (hopefully) puncture-proof protection. They’ve also got reflective white lines on the sidewall for added visibility.

Due to the electric scooter connotations there is also a brake light that comes on whenever you pull on the front or back brake levers that control the very capable disc brakes. The headlight too is reassuringly bright.

The fit and finish of the other components is absolutely fine, too. Whichever model you ride the RadRhino feels nicely put together; it’s solid. We also rate these bikes for their comfort value, with those big tyres, active suspension and a great-on-the-bum saddle rounding out the experience in style.

‘Get out, go further, ride Rad’ says the motto on the RadRhino manual and, boy, we did.