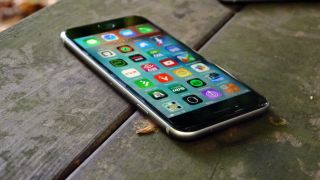 3D Touch was the headline feature on the iPhone 6S and iPhone 6S Plus with the aim to change how you interact with your phone and give you more options – and the latest patent from Apple suggests it wants to go further.

According to a patent filed in March 2015, Apple is looking into technology that would allow you to control your phone without having to touch the screen.

It would use the photodiodes in your screen and other proximity sensing hardware to detect hovering gestures.

The sensors within the LCD display would likely work in partnership with proximity sensors around the phone as well to combine and be able to tell when a finger, or your palm, is hovering over the display.

From there, it could narrow down to where you want to interact and mean you can get functionality without even tapping a button.

The possibilities with this technology are grand. It will allow you to control the screen, offer a new input for gaming and it would likely even mean the phone can lose the IR proximity sensor it uses to detect your head when on a phone call.

If this feature does make its way to the iPhone 7, it's going to take some getting used to.

Quite often we hang our finger over the iPhone display when reading or looking for what app to open next – that may not be possible with this new technology. 3D Touch had a similar problem when it first launched as people weren't used to the feature popping up after a hard press.

Considering the patent was only introduced in early 2015 we expect we won't see the technology make its way onto the iPhone 7, expected in September this year.

But it might be ready for the iPhone 7S or iPhone 8 in coming years - and that's only if Apple sees fit to use the technology after its development.