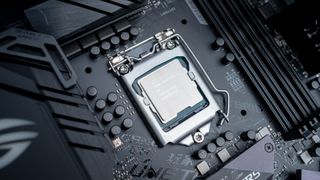 Intel is set to cut the prices of its processors according to a new report, and although no actual specifics of which chips these reductions might be aimed at are discussed, the speculation raises the prospect of more competitively priced Comet Lake-S desktop CPUs (when they finally arrive).

Obviously bear in mind that this is just a rumor, but according to DigiTimes (in a pay-walled report), Intel is aiming to drop PC processor prices in the second half (H2) of 2020 in order to defend its market position against the resurgent AMD. The source for this is multiple PC manufacturers.

Guru 3D, which spotted this, noted that DigiTimes reckons Intel has a phased plan for reductions this year, and initially the price cuts will be implemented for hardware manufacturers and partners who are using Intel processors in their systems.

That means there could then be another phase of price-cutting activity whereby Intel actually reduces the price of CPUs for consumers, and hopefully this will happen – but perhaps not immediately (and the report clearly states the second half of this year for these reductions, anyway).

The obvious hope for consumers is that Intel might be planning to cut the prices of incoming next-gen Comet Lake chips for desktop PCs, although the fly in the ointment of that theory is the timing. These chips are expected to land in the first half of 2020, possibly in April or May at the latest, which doesn’t marry up with the H2 prediction.

We could still see post-launch cuts, though, or even some kind of staggered launch of the range, but at the moment, all of this is just speculation. And quite frankly it’s rather a minefield of guesswork as to what Intel might be planning.

It does, however, make sense that Intel would be looking at price cuts on several fronts.

Firstly, we have already seen the chip giant make some big reductions on high-end desktop processors and server offerings, so it seems a logical enough extension that this activity could be visited on mainstream chips. Particularly given how hard Intel is being pressed by Ryzen, with answers not coming easy – further recall the rumors around the trouble the company is supposedly experiencing in trying to get the flagship Comet Lake-S processor under control in terms of heat and power consumption.

Secondly, this isn’t the first we’ve heard about Intel looking to leverage its financial muscle as a tactic to fend off AMD’s challenge. Back in October 2019, a rumor was floated that Intel has a huge budget of $3 billion which it intends to use to push Core and Xeon processors. The leaked slide divulging this info allegedly came from an Intel sales meeting and argued that one of the firm’s major advantages was “financial horsepower”.

So given this, and recent history, it’s hardly a surprise to hear that Intel might be planning further cuts on mainstream Core CPUs to help stay competitive in the overall processor market.

Not every argument runs in favor of Intel firing up a major program of price cuts later in 2020, though. For starters, Intel’s ongoing CPU production and supply problems have been well-documented, and a lack of supply hardly fits with a plan for price reductions.

Consumers aren’t the only consideration for Intel, either, as on the business side it has to keep shareholders happy, which again might run against the desire to pump a ton of cash into effectively promoting processors with price cuts.

All of this adds up to a set of considerations and variables which are doubtless very difficult to balance, and it’d be unwise to put too much stock into this rumor and the speculation around it.

Ultimately, Intel itself still may not know the answer to some of these dilemmas, and certainly it appears there are struggles with Comet Lake-S in some respects. These desktop chips were widely expected to get a showing at CES, and Intel mentioned nothing about them, which definitely seems odd.

It’s clear that Intel needs to take some action, of course, so potential further price cuts are certainly believable in that respect.