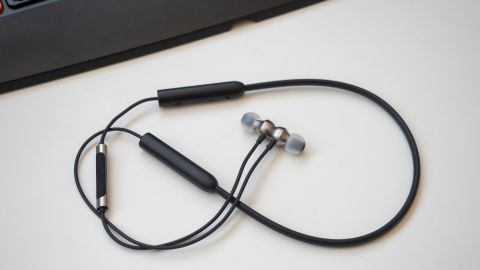 The RHA MA390 Wireless are one of the best deals for wireless neckbuds. They’re made extremely well, sound excellent, and are available at an affordable price. While their fit may not ideal for working out, they are sweat resistant and built to last.

Truly wireless earbuds are undoubtedly the future of portable audio but they still present compromises in battery life and wireless reliability. Plus, they’re easy to lose if you’re not careful.

Neckbuds, or earbuds that are worn around the neck, are a great alternative to true wireless earbuds as they offer longer battery life for continuous listening and stronger wireless performance. Case in point: the OnePlus Bullets Wireless, which we gave the Best in Class award to.

We loved the Bullets Wireless for their balanced sound, strong wireless connection, and unique magnetic on/off switch. However, OnePlus should be worried about the RHA MA390 Wireless, which we’ll be reviewing today.

For the same price as the Bullets Wireless, the MA390 Wireless trumps it in build quality, slightly more dynamic sound, and understated design. It’s a tough choice between the two but here’s what you need to know about the RHA MA390 Wireless to help you make a purchasing decision.

RHA is known for its excellent build quality and the MA390 Wireless is no exception. Its earbuds are milled out of a solid piece of aluminum. Even the in-line microphone is made of aluminum, making it feel much more premium than its $70 (£60, about AU$106) price tag suggests.

Thankfully, RHA ditched the aluminum for the neckband, which is made of silicone, making it IPX4 sweat and water resistant. There’s also a rubber door that hides the USB-C charging connector and we’re glad RHA jumped to USB-C, unlike other headphone makers who are sticking with microUSB.

While the neckband terminates with plastic at each end, it doesn’t feel cheap and keeps the headphone lightweight appeal. The lightweight design is great for long listening sessions and working out, though the MA390 Wireless don’t feature the wing tips like the OnePlus Bullets Wireless which help to keep the earbuds in when exercising.

In terms of fit, we found the RHA MA390 Wireless extremely comfortable thanks to its smaller earbuds. They’re so small that we felt comfortable sleeping with them, can’t be said about many wireless earbuds.

RHA packs in small, medium, and large ear tips to help you find a good fit and the company also includes a pouch ... which would've been nice if it wasn't much too small for the MA390 Wireless. We hope RHA will include a bigger pouch in the future.

While we loved the OnePlus Bullets Wireless for its neutral tonality, there are times we wished for more bass. If you like your sound slightly on the warm side of the spectrum, you’ll love the RHA MA390 Wireless. Bass is full and punchy, mids let vocalists shine and the highs are energetic and feature a good amount of resolution thanks to aptX support.

Compared to the Bullets Wireless, the MA390 Wireless feature a slight “V” shaped frequency response, though we hesitate to call the mids recessed. Instead, it sounds like there’s more bass and treble energy.

Wireless performance is excellent and we never had audio dropouts that are common with truly wireless earbuds. We could move around the house in a few rooms before the connection stuttered. If you have your phone close by, you’ll likely never experience an audio dropout.

For battery life, The RHA MA390 Wireless are rated for 8 hours and we saw slightly below that. At moderate listening levels, we saw 7 hours of listening consistently. Thankfully, the USB-C connect means these earbuds charge up fast, but not as fast as the OnePlus Bullets Wireless when paired with OnePlus’ proprietary fast charger, which only ships with its phones.

After spending several weeks with the RHA MA390 Wireless, we came away extremely impressed with the package RHA has come up with. The headphones are built extremely well, have a fun sound signature, and can take a beating. And all at an affordable price.

It’s main rival, the OnePlus Bullets Wireless, are also excellent, however we give the nod to the RHA MA390 for its more dynamic sound and better build quality.

Popular neckbuds like the Beats X and the Jaybird X3 are more expensive and sound worse, making the RHA MA390 Wireless a no brainer if you want fun sound, better build quality, and an understated design.