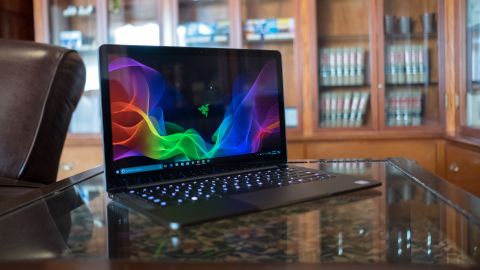 The Razer Blade Stealth isn’t just THE Ultrabook for gamers, it’s one of the best Ultrabooks for everyone. Though it doesn’t offer the best battery life, its vibrant display, great performance and excellent value make it one of our favorite laptops of the year.

The Razer Blade Stealth quickly became one of our favorite all-time Ultrabooks, and it’s only getting better with age. In the middle of 2017, the formally 12.5-inch laptop moved up to a larger, 13.3-inch display, putting it on an equal footing with other notebooks in its category. Recently, Razer upgraded its Ultrabook with Intel’s latest, 8th-generation Kaby Lake Refresh processors.

Thanks to these improvements, the Razer Blade Stealth has never looked better, with slimmer screen bezels and the best performance numbers it has ever produced. While it offers slightly shorter battery life than its predecessors, this 13-inch laptop is well worthy of consideration alongside the MacBook Pro and Dell XPS 13.

Here is the Razer Blade Stealth (2017) configuration sent to TechRadar for review:

Starting at $1,449 (about £1,454, AU$2,329), the Razer Blade Stealth is more expensive than it has been in years past, but that’s partially thanks to its elevated specs. At the bare minimum, each of these Ultrabooks comes rocking a quad-core Intel Core i7 processor with integrated Intel UHD graphics, QHD+ (3200 x 1800) resolution display, 16GB of RAM and a 256GB SSD.

Unfortunately, the latest Kaby Lake Refresh update also bumps up the weight to 2.98 pounds (1.35kg), making it the heaviest version of the Stealth that Razer has ever released. Comparatively, the Kaby Lake-powered, 13-inch refresh tips the scales at 2.93 pounds (1.33kg), and the 12.5-inch Razer Blade Stealth weighs in at 2.84 pounds (1.29kg).

These fractions of a pound/kilogram increases are likely due to additional cooling needed for the Stealth’s new quad-core processors. While it isn’t dramatically heavier, this Ultrabook is getting dangerously close to weighing more than three pounds.

Aside from the screen bezels, the biggest aesthetic change Razer has introduced is the new gunmetal version of its Ultrabook. Synonymous with its name, the Stealth has always been the company’s most understated laptop, and the new color adds to that quality.

Gone are the RGB keyboard and light-up lid logo. Instead, the gunmetal version features a simpler white backlight on the keys. Meanwhile, the ‘tone-on-tone’ printed triskelion symbol is actually hard to miss unless you’re turning the laptop from side to side, like one of those old holographic prints.

The result is a professional-looking Razer Ultrabook design. However, its off-gray paint job still sets itself apart from the pack of black rectangles in the room. Of course, if you’d rather have all the RGB lighting and the jet-black look, the regular version of the Stealth is still available.

Bigger and brighter than ever

It’s remarkable that Razer has squeezed in a bigger display without making the laptop any larger. It did this by simply reducing the size of the bezels on all sides by 50%. Whereas the black bars around the display once measured nearly an inch wide, they now look barely larger than a single centimeter.

On top of the added screen real estate, the Razer Blade Stealth features a sharper 3200 x 1800-resolution panel that’s sits above the previous, default 2560 x 1440 display. Unfortunately, there’s no option of getting a 4K display on this Ultrabook other than going with the older, 12.5-inch model.

To our eye, the QHD+ screen on the latest Razer Blade Stealth resolves plenty of detail as is, and we don’t really miss having an Ultra-HD resolution on a screen this small. That said, if you absolutely must have 4K on an Ultrabook, there are the Lenovo Yoga 920 and HP Spectre x360.

According to Razer, the new display also boasts 100% sRGB color coverage and up to 400 nits of brightness. We can confirm that the screen is much brighter now, outshining even rays of sunlight streaking through our office windows. Razer’s IGZO displays have never lacked in color rendition, and the added color depth helps the screen resolve more distinct shades of hues.