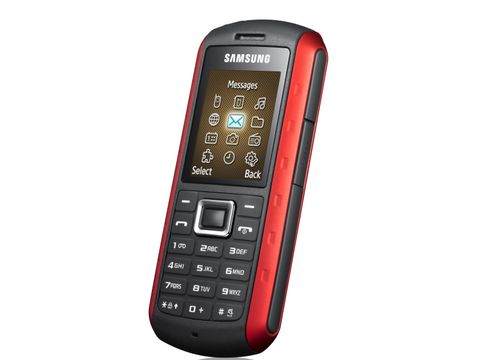 Naturally, we tested the Solid Extreme to see if it matched up to Samsung's waterproofing claims. Having submerged it in water for 30 minutes, we can confirm that it came out alive and in full working order. In fact we tested it for longer, just to see, and it survived an hour in the bath with no problems.

We thought it best not to try beyond that, as we had to give the phone back…

When it comes to taking a few knocks, the phone was suitably robust and seemed to take in its stride some light chucking around from a metre or so.

However, while it has a solid, sturdy build, it's not designed to withstand heavy-duty body punishment, so users should go easy on inflicting gratuitous hard knocks, or it could end up scratched and damaged.

The user interface used on the Solid Extreme is consistent with the sort of menu systems we've seen on many other low- and mid-range Samsungs, albeit worked for a lower resolution presentation on the screen. It has an initial start-up wizard, which from first switch-on confirms configuration settings as well as the date and time.

This D-pad is slightly proud of the surface, providing a sufficient edge when pressing the directional keys. D-pad shortcuts to certain features are pre-loaded – message, calendar and music player, plus a 'My Menu' list of five functions that can be accessed directly with a quick key press.

All of the shortcuts and the My Menu list can easily be changed in the Settings menu to many other options, so you can configure them to suit the way you use the phone.

One strange choice, however, is the default setting of the D-pad's central select key to launch the Solid Extreme's Wap browser. It's not a particularly sophisticated or fast application (it's an Openwave Wap browser), so it seems unduly prominent.

Also, as it's not labelled, users could initially find themselves launching it by mistake.

Pressing one of the softkeys takes you into the main menu, which is presented as a familiar grid of icons. Clicking on these takes you deeper into the sub-menus, most of which present additional options in lists. These are numbered, so you can select options by pressing the numberpad rather than scrolling down the screen.

The limits of the screen mean the graphics aren't as slickly presented as on other Samsungs, but it's easy enough to work your way around the options – and it's quick to respond to the press, with a full spread of settings to work with.

Some users may find the default auto keylock unduly prompt. It comes on after 15 seconds of inactivity, requiring a '*' button press to unlock. However, this can easily be extended by changing the 'Backlight time' setting in the Display and lights section of the Settings sub-menu.