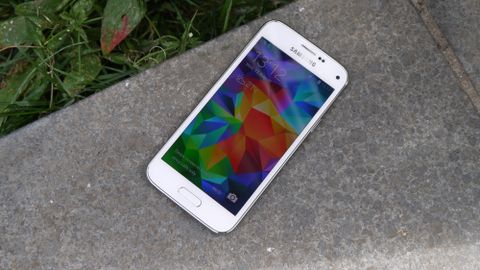 The Samsung Galaxy S5 Mini comes equipped with a removable 2100mAh battery, which is actually a pretty decent offering.

You'll only find a 1860mAh power pack inside the recently announced Galaxy Alpha, while the more direct rivals to the S5 Mini boast similar batteries - the HTC One Mini 2 has a 2110mAh juice pack, while the Sony Xperia Z1 Compact comes out on top at 2300mAh.

While the Galaxy S5 Mini sports the smallest battery (just) compared to its closest rivals, it does have the advantage of being removable - allowing you to swap out a flat battery for a fully charged one.

It's also quite a bit smaller than the 2800mAh found in the Galaxy S5 which, with the help on Qualcomm's Snapdragon 801 chip, could see out more than a day on a single charge.

I did fear a little for the battery life performance on the Galaxy S5 Mini as it doesn't benefit from the power saving efficiencies that come with a Qualcomm processor - but you needn't worry too much here.

Samsung's Exynos 3 chip performs well and I was able to get a full days usage from the Galaxy S5 Mini relatively easily with moderate usage.

That included a couple of hours of Spotify playback, around an hour of gaming, some calls, texts, emails and social media action, plus my Jawbone Up24 was continuously syncing to the S5 Mini all day.

When I pushed the handset hard the power did drain noticeably quicker and you'll be dashing to a charger before the day is out, but it's what I've come to expect from smartphones in this tier.

I did find the battery performance was better than one the One Mini 2, which is one of the few areas where the Samsung Galaxy S5 Mini beats its HTC rival.

Running the TechRadar battery test on the Galaxy S5 Mini, consisting of a 90 minute full HD movie at full brightness and accounts syncing over Wi-Fi in the background, resulted in a loss of 16% of the battery life.

That's a strong performance, as the One Mini 2 lost 29% in the same test, while the Xperia Z1 Compact lost 23%. If you fancy catching a movie on the 4.5-inch 720p display of the Galaxy S5 Mini you shouldn't have to worry too much about the battery life.

Of course if things do start to get tight you can always switch on Samsung's ultra power saving mode, which reduces the interface and features to maximise the last of your battery's life.

Ultra power saving mode switches the theme to greyscale, and provides a simplified UI with only a handful of apps available for you to use, including calls, messaging, clock, Facebook and the web browser .

The Samsung Galaxy S5 Mini also gives you an estimated maximum standby time in this mode, so you can get a general idea of how long the phone will last.

If you don't want to lose all that functionality there's always the less aggressive power saving mode which can restrict background data and performance and also offers you the option of a greyscale theme to reduce the power drain from the screen.