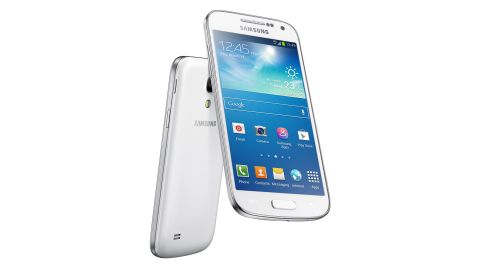 Takes a lot from the S4 and packages it nicely - plus the technology on board doesn't disappoint, although the CPU might judder at times.

Being the baby of the S4 range, the Samsung Galaxy S4 Mini manages to slide in at a relatively reasonable price point, depending on where you look. SIM-free offerings have been seen as low as £360 (around AU$595), and you can get it for free on UK contracts starting at £21 per month if you're willing to give up having oodles of data.

This puts the Samsung Galaxy S4 Mini right up against the well established Nokia Lumia 820, Sony Xperia SP, and the ageing, yet incredibly popular Samsung Galaxy S3. But its main competitor is the HTC One Mini, the cut-down version of the world's best smartphone.

However, it seems that like with the Samsung Galaxy S3 mini, the South Korean brand has sliced its handset down from the full-fat Galaxy S4 even more than its Taiwanese rival - which could explain why it's slightly cheaper to buy at the moment.

We're also left a little confused by the need for a Samsung Galaxy S4 Mini, possibly something brought on by the way that Samsung's nearest and dearest rival, based out in Cupertino, handles things.

Apple hasn't, as yet, released a lower powered version of its flagship handset, instead relying on sales of a previous iteration, but rumours of an iPhone 5C, offered at a lower cost, keep wandering around. This begs the question, does Samsung need the Galaxy S4 Mini, when it already has the Galaxy S3?

This is something that we shall take a look at, but looked at entirely on its own, a dual-core processor clocked at 1.7GHz coupled with 1.5GB of RAM definitely sets the Samsung Galaxy S4 Mini off to a decent start. A 4.3-inch Super AMOLED qHD display adorns the face of the S4 Mini.

The plastic chassis is more fitting to a handset of this pricing and helps to keep the weight low at only 107g (3.8oz).

Size of phones is a hot topic, with many people feeling that modern flagships, and the rise of phablets, are just too large. We were showing off the Samsung Galaxy S4 Mini to friends, and one avid iPhone user commented that it was a far nicer size than the S4, and a lot easier to use, especially one-handed.

We're not going to dedicate an entire section to the screen in this review, like we did on the Samsung Galaxy S4 review. That's not to say that the screen is a letdown, because it's leagues above the Galaxy S3 Mini screen.

There isn't any super-fancy-super-charged-hover-over-the-screen tech involved like there is in the full Samsung Galaxy S4, but the 960 x 540 resolution, while not HD, is bright, clear and crisp.

That said, we found that we were able to operate the Samsung Galaxy S4 Mini with a pair of gloves on, which gets it a thumbs up.

Behind that screen and the plastic frame sits all the bells and whistles that you might hope for, including Wi-Fi, Bluetooth 4.0, GPS, NFC, 4G (confirmed for the UK, with 3G variants in other markets) and an infra-red blaster. Yes, the Samsung Galaxy S4 Mini is also a TV remote.

Design-wise, the Samsung Galaxy S4 Mini obviously follows in the footsteps of the bigger Samsung Galaxy S4, and every Galaxy phone in recent memory. The massive screen takes up the majority of the front real estate, a large home button adorning the base, and the back and menu soft keys sitting either side.

The thinner bezel is vaguely reminiscent of the iPad mini, and something that we thought was very impressive on both the aforementioned Apple device and the Galaxy S4.

Long gone are the days where phones and tablets had similar designs, square with chunky black bezels, with the curvier edges and almost edge to edge display making the Samsung Galaxy S4 Mini feel like a premium device.

Colour-wise, the Samsung Galaxy S4 Mini comes offering the now standard black and white, with a metallic band wrapping around the edge of the frame. It is something we've seen on other models, and it gives the S4 Mini a more premium feel.

The plastic back wraps around the Samsung Galaxy S4 Mini, and like the S4 and other Galaxy models, is removable. We were very disappointed with the back plate, however. There is quite a lot of give in the plastic, as a result of the thinness to keep the depth and weight of the phone down.

Tucked away is 1900mAh worth of battery, which again is removable. For intense users, this might prove to be a bonus, because it means secondary batteries can be swapped easily. In all, we're not overly fussed given how cheap portable USB charging packs are.

It's always been a staple of the Galaxy diet, but given that Samsung devices have a heavy media slant, it's very important that the 8GB (around 5GB after putting the Android Jelly Bean OS on top) is backed up with up to 64GB external storage.

In terms of photography, the Samsung Galaxy S4 Mini obviously doesn't come close to the prowess of the Galaxy S4 Zoom that was announced alongside the Mini and the Galaxy S4 Active.

That's not to say that the Samsung Galaxy S4 Mini is lacking in that department, since it has a 1.9MP front-facing snapper for those pouty profile pictures, and an 8MP sensor on the back. The rear sensor also comes with an LED flash, for improved night time photography.

The 1.9MP camera above the screen at the top of the Samsung Galaxy S4 Mini sits alongside various other sensors, as well as the front speaker and Samsung logo.

The sensors aren't too noticeable on the black model, but they are heavily visible on the white. Interestingly, and disappointingly, there is no notification light to speak of.

The power/lock button sits on the opposite side of the volume rocker, again following the traditional Samsung layout. Both buttons were easy enough to hit, even one-handed.

The obligatory ports again sit in their traditional places, the 3.5mm headphone port (beside the infra-red blaster) at the top and the micro USB at the base.

In the hand, the Samsung Galaxy S4 is very comfortable, being easy enough to use one-handed, and extremely pleasant for those who use both.

The 4.3-inch screen sits in a sweet spot, a lot easier to hit than the 5-inch screens that are increasingly popular (or the 6.44-inch leviathan on the Sony Xperia Z Ultra).

Design-wise, the Samsung Galaxy S4 Mini is unsurprisingly similar to the Galaxy S4, a phone that we said was a little underwhelming design-wise.

The curvier design sets it apart from the standard squarer smartphone, and the thinner bezel is a little iPad mini-esque. Samsung's mini version of its flagship phone certainly makes you want to take a second look.

Thanks to Unlocked-Mobiles for providing our Samsung Galaxy S4 Mini review sample.