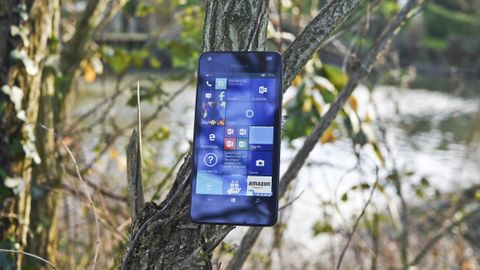 With a good camera, a nice screen and decent speakers, the well-built Lumia 550 makes a solid first impression. However, given the slow performance and a buggy OS, those looking for a bargain might be better looking elsewhere.

Update: Lumia 550 is on sale now thanks to early Black Friday deals, a discount from its original launch price. Here's how it performed in our review.

Microsoft Lumia 550 is the budget-friendly Windows 10 Mobile phone that doesn't suffer from high expectations, and that's a good and bad thing.

That contrasts with the Lumia 950 and 950 XL – the first flagship smartphones with the Microsoft's new operating system – bearing the weight of expectation.

Unfortunately, despite significant efforts on the part of Microsoft, their arrival was heralded by persistent software bugs and lukewarm reviews.

Things have gone rather more smoothly, however, for the Lumia 550, the budget entry in the Windows 10 Mobile lineup.

While some retailers even chose to postpone the release of the 950 and 950 XL, mainly due to the aforementioned software problems, the 550 has sailed onto the market virtually unannounced.

Is this alone enough to see the 550 succeed? And can it garner some desperately-needed positive press for the Lumia camp?

Over the years Microsoft has gained something of a reputation for products that scream 'productivity'. And any mention of productivity, in turn, tends to suggest phones that aren't likely to set pulses racing when it comes to design.

Sure enough, with its preponderance of straight lines and matte plastic, the Lumia 550 is likely to be greeted by phone fans who place a premium on style with an audible "meh".

There's a distinct lack of original features on the handset. Aside from the different camera modules on the back there's almost nothing to distinguish the Lumia 550 from its more expensive siblings, asides from the apparently superior build of course.

The Lumia 550 has a more solid overall feel in the hand, and the few flaws that are present are made tolerable by the price. And there may be a rather simple explanation for this.

While the Lumia 950 and 950 XL are made for the most ardent of Windows Phone fans, the Lumia 550 is made for a different market altogether: IT managers. These are devices made to be bought in bulk by those looking for lots of bang for their buck.

The look of the handset may seem familiar, however. Weighing in at 142g and with a 4.7-inch display, in the hand the Lumia 550 feels identical to the Lumia 630 in almost every respect.

Indeed, with the two devices side by side, the only immediately noticeable difference is in the branding, with the newer handset being a product of Microsoft rather than Nokia.

On the top edge of the phone is the 3.5mm headphone jack. At the bottom is the micro USB port for charging and data transfer. Mercifully, Microsoft hasn't made the leap to USB Type-C just yet, which means you won't have any problems when you need to charge the device.

The right side of the handset is standard issue for a Lumia, with the power button at the mid-way point and the volume rocker above.

On the rear are an understated silver Windows logo, and the 5MP rear-facing camera with a single LED flash. The back of the handset is removable, enabling access to the 2100 mAh battery, nanoSIM slot and the microSD slot.

The front is home to the comfortably-sized 4.7-inch screen, which proves to be a nice compromise between maximum screen real estate and easier one-handed use. Above this is the 2MP front facing camera, along with a brightness sensor.

The screen on the Lumia 550 is one of the highlights of the device. Over the years, as components have become less expensive, high-quality screens are one of the features that have found their way down the pecking order from higher-end handsets.

With a resolution of 720p stretched across those 4.7 inches, the Lumia 550 boasts a pixels-per-inch count of 312, bringing it comfortably into 'retina' territory.

Although it's 'only' an LCD panel and not AMOLED, such as on the Samsung Galaxy S6, contrast and saturation are very pleasant overall. Whether watching videos, browsing the web or reading long-form articles, I was perfectly happy with the display quality.

Although it doesn't boast the greatest range of viewing angles, suffering from flat colours at the extremes, the Lumia 550 is nonetheless comfortably bright in a variety of viewing environments.

The ambient brightness sensor can, however, be a little finicky; I found that I had to manually adjust the lighting on several occasions.

While corners have inevitably been cut to help keep costs down, in terms of its screen the Lumia 550 strikes a reasonable balance between price and quality.

Next Page Outlook and Edge