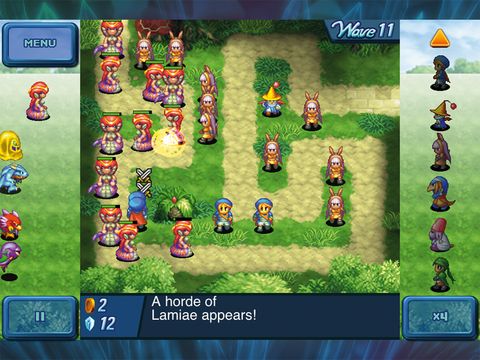 The Lamiae, evil lady monsters that featured in the Final Fantasy IX game, are out to get you

Crystal Defenders is a straightforward tower defence game not unlike a million other tower defence games on the internet and on mobile devices right across the planet. The difference here, of course is that it takes place in the Final Fantasy universe and you're defending crystals rather than towers.

There are three levels of difficulty but in each the aim is the same: to stop hordes of enemies getting from one side of each single-screen map to the other. You do this by placing military units alongside the pathways of the level so that they attack the enemies as they pass by.

Some units, archers for example, can attack enemies from a distance whereas warriors have to leap into an enemy's path and get stuck in. Magical characters can launch devastating attacks, but take a while to recover so need to be used carefully.

Also, some enemies are resistant to magical attacks so you'll need to level up the regular units to compensate. The further you get, the more complex the strategic options.

Final Fantasy fans will love the familiarity of the multitude of characters and creatures that inhabit the game. What they won't be so keen on is the fact that it's prone to frequent crashes and graphically looks little better than the iPhone iteration of the game.

Instability and lacklustre looks are two faults that we're not used to levelling at Square Enix games.

One last word of warning: as you progress the game becomes relentlessly tough and you will always, always fail at some point.

But if you're into open-ended, points-based challenges, this is a pretty good tower defence game… just not a particularly good Final Fantasy release.