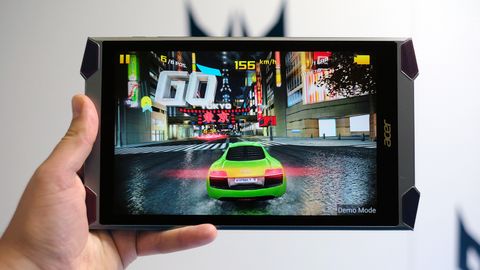 A dose of gaming comes with any tablet. It's part of the territory, but few tablets say they're made specifically for games above all else. That's the Acer Predator 8's bag, as part of the Predator series.

Under this black and red umbrella you'll find real top-end gaming laptops like the Predator 17, as well as more accessible devices like this tablet and the Predator 6 Android phone. Extra gamer abilities here include vibration feedback and an unusually beefy speaker array. However, at its heart this is just a good old Android tablet with a gaming twist.

Love it or hate the look, there's no mistaking the Acer Predator 8 for a plain, classy tablet. Even Acer described the design as "super-aggressive".

Decked out in red, silver and black, and with pretty striking lines, the Predator 8 is sure to turn as many people off as it attracts. Have a look yourself, see what you think.

In more practical terms, the design seems reasonable enough. The shell is mostly plastic, but there's a plate of brushed metal on the back to give that touch of a more expensive style.

The Acer Predator 8 element that really hits you when you look at the tablet face-on is the speaker array. There are four drivers, one at each corner of the tablet's face. For the sake of the other people around us at IFA 2015, where the thing was announced, we didn't crank the volume. But Acer says the Predator Quadio speakers make it the "loudest gaming tablet on the planet".

In other words, it's louder than the Nvidia Shield Tablet. Or had better be.

The speakers make the silhouette of the Predator 8 pretty odd, but it doesn't seem to affect handling. It's a pretty skinny and light tablet too at 8.6mm thick and around 350g. Neither stat is remarkable, but you're not going to get arm ache from holding the thing up one-handed for five minutes.

Acer's other gaming hardware optimisation is vibration feedback, basically meaning there are similar motors inside to those that make your phone buzz. While Acer has worked with mobile gaming maestro Gameloft on this, it still boils down to the odd bit of vibrate in games like Asphalt 8. It's nothing too special, although we'd be happy to be converted once we get to play with the tablet a bit more.

Has Acer put a bit too much of a focus on the flimsy gaming extras? Well, there's some argument for that in the screen.

The Acer Predator 8 has an 8-inch Full HD screen. That may sound fine, but at this price you can get the Samsung Galaxy Tab S 8.4, which gets you a QHD screen. Even its follow-up the Tab S2 is meant to cost roughly the same amount.

into some elements of the screen's calibration. Acer says the Predator 8 can deliver 100 per cent of the NTSC colour gamut, meaning it has very deep shades of any colour you could name.

However, in person it looks a bit oversaturated, lacking some of the natural appearance of an iPad Air 2, for example. After playing with the Predator 8 we heard that there are options to tone down the colours a bit too, though. Fingers crossed they'll tame this beast.

Running the operation is an Intel Atom x7-8700 CPU, the same used in the Microsoft Surface 3. It's the fastest tablet CPU out there, and it seems unlikely that some of the most challenging Android games will have been as well-optimised for it as for the top Snapdragon GPUs.

get with top-end rivals: shiny wet pavements galore. With any luck the Predator 8's gaming chops should be largely the same as those of a Snapdragon high up the range. It doesn't beat the Shield Tablet's Tegra K1, though.

There's 2GB RAM on-board, which is generally enough to get you good experience from the Android 5.1 software used here. Storage is solid too, with either 32GB or 64GB on-board, plus a microSD slot to let you load it up even further.

The Acer Predator 8 is a strange tablet. It positions itself as a gaming tablet, but really all tablets are gaming tablets. The quad-speaker array really needs to impress to lend a bit more weight to its cred.

And while the design makes it firmly part of the Predator 8 family, we imagine many of you would prefer a slightly plainer look, one that won't compound the odd looks you might already get for playing Asphalt 8 on the bus. That said, despite all reservations it appears to have everything needed for a good tablet experience.