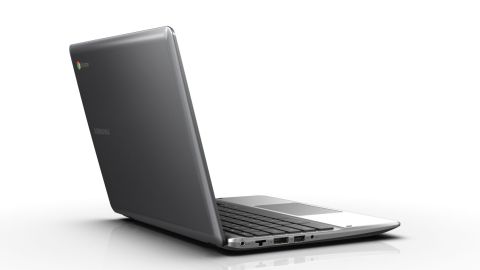 The new Samsung Chromebook is a fine piece of kit which is a step on from its predecessor. Although Chrome OS is still not perfect, it's progressed a long way in a short time and could become a key challenger

Chromebooks - and the Chrome OS operating system they run on - are worthy innovations, but so far have fallen short of our expectations. The idea of a laptop that's so streamlined for browsing and working on the web that it boots in seconds and can run all day off a single battery charge is certainly appealing.

Google's Chrome web browser is a fast, light and versatile program for accessing the web. Building an operating system around it, while integrating many of Google's cloud services such as Google Drive, was a great idea. Coincidentally, you get 100 GB of Google Drive storage free for 2 years.

So Chromebooks had the potential to succeed where netbooks failed, and even maybe take on the might of the increasingly popular tablet.

However, as we've seen with Chromebooks such as the Acer AC700 and Samsung's early Chromebook, the results have so far been rather disappointing.

Early versions of the Chrome OS had their flaws, especially when it came to the playback of media, which would often stutter, or not play at all. Having a whole operating system in a web browser that took up the entire screen also made multi-tasking and other tasks we take for granted in desktop-based operating systems such as Windows 7 much more difficult.

The hardware that was supporting Chrome OS didn't help, either. Just because a laptop is streamlined, doesn't mean it has to be underpowered. Yet many of the early Chromebooks came with paltry RAM and integrated graphics and hardly any internal storage, which made using them sluggish and frustrating.

Finally a laptop and operating system that stores everything on the web is only as good as your internet connection - so if you weren't able to access a wireless network, the Chromebook would be all but useless.

The Samsung XE550C22 Chromebook has a big mission in front of it, then. It needs to overcome the failings of past Chromebooks and prove to those of us who have been left unimpressed with what we've seen so far that Chromebooks and the Chrome OS are relevant. It's certainly a tall order, but can it succeed?