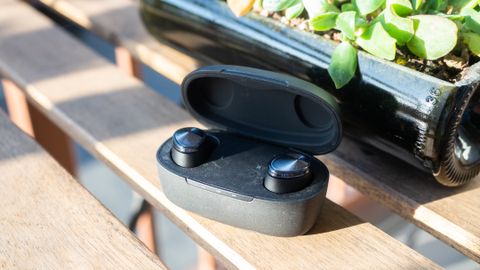 The NuForce BE Free6 offer good sound, excellent comfort, and solid wireless performance, but they don’t stand out from the crowd. That’s not to say the BE Free6 can’t hold their own, but for the money there are headphones out there with better sound and build quality.

Optoma has a track record of producing solid headphones for the price. We liked the company’s BE6i and BE Sport3 for their excellent build quality, sound, and comfort, and when it comes to true wireless headphones, Optoma has released a few solid sets like BE Free8 and BeFree5. The successor to the NuForce BE Free5, the BE Free6, is nearly identical to its predecessor but offer subtle refinements.

On paper, the BE Free6 offer a lot for its $99 (£99, AU$130) price: Bluetooth 5.0, IPX5 water resistance, 6 hours of playback on a single charge, and support for the AAC codec. These are all great features, but due to some incredibly tough competition they just doesn’t stand out from the crowd. Here’s why.

The NuForce BE Free6 is nearly identical to the previous BE Free5. The only visual differences are the finish of the buttons and the matte, slightly rough texture of the charging case. That’s not a problem as we liked the design of the BE Free5 and both headphones feature iPX5 water-resistance.

Unfortunately, however, we were disappointed to find that the BE Free6 didn’t come with sport “wings” as the BE Free5 did - the earbuds are quite comfortable and secure without them, but they were nice to have nonetheless.

The earbuds themselves are small in diameter but they're both long and thick so they tend to protrude from your ears a bit. The buds each have a single physical button to control playback, answer/hang up calls, and to active your phone’s voice assistant. The headphones even allow you to change volume with a double press; on the left earbud for volume down and on the right for volume up.

One thing we noticed during our testing that the right earbud’s button was slightly loose and rattled while we were walking or moved our head rapidly. It’s a subtle clicking sound but noticeable while listening to podcasts but imperceptible when listening to music at medium volume.

Another minor difference between the two generations of headphone is that, while the BE Free5 has a smooth plastic case, the BE Free6 has a rough, matte texture that picks up knicks easily. While we like the matte case for its ability to resist fingerprints, it feels a bit too rough in the hand for our liking. However, the switch to USB-C charging instead of microUSB is nice.

The sound of the NuForce BE Free6 is warm and features enough resolution for the price. While more expensive headphones like the Sennheiser Momentum True Wireless will get you more detail, you’ll be spending three times the price.

The BE Free6 boost the bass to an acceptable level where it doesn’t impede too much into the mids. The bass is also great for helping to drown out a noisy commute.  Similarly, vocals are great with the NuForce BE Free6, presenting voices with texture and presence, and highs are also good without being overly boosted to fake higher resolution. The headphones never sound harsh in the upper frequencies.

Soundstage is also fairly good with music sounding like it’s coming from around our head but not as expansive as the more expensive RHA TrueConnect or Klipsch T5 True Wireless.

One thing that impressed us about the BE Free6 was its wireless connection: The headphones sport Bluetooth 5.0, which means each bud connects to your device without a master/slave configuration. This allows true wireless headphones to have a more reliable connection and we hardly experienced a hiccup while testing the NuForce BE Free6.

In terms of battery life, the earbuds are rated for six hours per charge, with four charges held by the case for a total of 24 hours per charging cycle. Our numbers were pretty much on par with that as we got five hours per charge and around 20 hours with the charging case. Ultimately that means while these aren't your best bet for transcontinental flights, they should have enough life to get you through your commute for a week without needing to be recharged.

The BE Free6 is a jack-of-all-trades, but master of none. These headphones do everything well, but don’t excel in any particular area. That means you won’t be disappointed if you buy these headphones but there are better options for the price. For the same money, the Creative Outlier Gold are a better choice because of its 14-hour-per-charge battery life and slightly more detailed sound. If bass is what you’re after, the Sol Republic Amps Air 2.0 are an excellent choice for slightly more money.