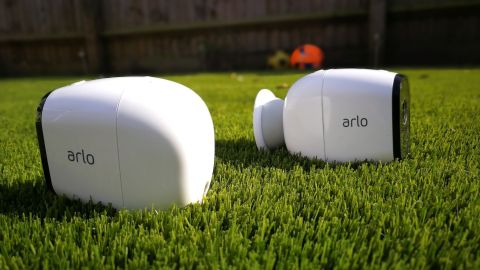 Looking for a professional-quality security camera set up for your property? Then the Arlo Pro 2 is definitely worth considering. The cameras are solidly built and capable of recording crystal-clear HD video, it's just a pity the base station is cumbersome to set up, and the initial cost is so high.

The Netgear Arlo Pro 2 is part of the new wave of Internet of Things (IoT) devices, products that connect over Wi-Fi and to other devices, and are available in ever-decreasing sizes.

Netgear has found itself in a race against companies like Google-owned Nest and Amazon-owned Blink and Ring to bring connected products to your home. Each company is working hard to produce smaller and easier-to-use cameras that can be placed around your property. These cameras don't need wires, are easy to install, and can be controlled with an app on your phone, no matter if you're home or not.

Arlo has gained a reputation for its a range of solidly built internet cameras. Here, we look at one of its high-end security camera systems, the Arlo Pro 2, which currently retails for $479.99 (£499.99, AU$479.99) for the starter pack with the hub and two cameras. You can buy other packs with more cameras, or individual cameras if that better suits your needs.

It's worth noting that the cameras do not work without the hub so don't think you can get a bargain by just buying an individual camera.

Although billed as a wire-free solution, the Arlo is in fact very different from some of its cheaper competitors in that it comes with its own base station - about the size of a small router - which needs to be connected to your broadband router via the Ethernet cable supplied.

Not only will you need a spare Ethernet port on the back of the router, you will ideally need to be able to place the base station close to the router in your home. Alternatively, it is possible to use powerline technology for greater flexibility, in which case you can plug the base unit into a powerline socket.

Provided with the base unit are two oval shaped white cameras, resembling giant eggs. Fully waterproof (IP65 rating), these can be mounted indoors or outdoors using the very strong, magnetic mounts included. Alternatively, they can be freestanding on a bookshelf or kitchen work-surface.

On the bottom of each camera is a small speaker and microphone for two-way audio while at the top are two discreet buttons. One of these is to sync the camera with the base station, the other opens up the back of the unit to reveal the Lithium Ion battery.

The battery needs to be fully charged either using the USB plug and lead provided or by plugging the camera directly into the USB port on the back of the base unit. Only when the light on the front of the camera turns solid blue is it ready to sync with the base unit.

Unlike other security cameras, Arlo essentially offers two means of set up. Either you can download the iOS/Android app to your smartphone or you can set up cameras via the web at https://arlo.netgear.com. However, it’s not possible to use both your phone and, say, your PC at the same time to log in – it automatically detects you are logged in on one device and disconnects the other.

However, we encountered severe problems with our initial test sample with the base unit simply failing to recognise the security camera and the camera light on the base unit remaining amber. It seems the problem may have been with the actual broadband router we were using (a D-Link model DSL-3782 provided by TalkTalk) which was incompatible with the Arlo Pro 2 base unit.

Only when this was switched for a Netgear Nighthawk VDSL/ADSL router and the first base unit was replaced with a new model were we able to sync up both cameras successfully. Netgear confirmed that there have been some isolated issues with certain broadband routers and providers (in particular Talk Talk) but these had all been resolved via Netgear’s support network.

Despite initial problems, once the base unit and cameras were synced successfully we were able to control the system very easily. Each camera can be individually labelled depending on where you use it (ie. ‘office’ and ‘back garden’) and controlled using your PC/tablet or your smartphone.

For example, you can view two live images side by side at the same time or expand just one of them to fill the screen. Although the field of view isn’t as wide as some security cameras (130 degrees compared to 180 degrees on some) image quality from the 1080p HD camera is absolutely excellent (quality can be reduced if needs be to save on battery power).

What’s more, thanks to an 8x digital zoom you can really hone in on parts of the image either by using the magnifying glass icon on the web interface or by going into the video settings and using the pan and zoom option on the smartphone app.

Other useful features include a Nightvision mode so you can see what’s happening in the dark and a two-way audio option (speaker volume can be adjusted to different levels via the app) so you can have a conversation with people in the house.

While being able to view footage from the cameras as it happens is useful, unless you're completely paranoid you probably won’t be watching them 24/7. Instead the Arlo Pro 2, like most security cameras, will inform you if the cameras detect motion.

Each camera can be individually ‘armed’ to detect motion all the time or disarmed so they don’t detect motion at all. There’s also an option to only arm the cameras during certain hours of the day (ie. when you are at work) so you don’t receive alerts every time you move round the house.

Push notifications can either be sent to your phone via the app or you can receive email alerts if you prefer. The free package gets you one week of video and support for up to five cameras. Should you feel you need more there are Premier and Elite packages that cost $99 (£64, AU$129)  and $149 (£99, AU$189) respectively.

Finally, one extremely useful feature is an integrated alarm. This helps makes this system much more effective than some budget priced security cameras. Built into the base unit is a ‘smart siren’ with a 100+ DB output (it can be turned down via the app) which can be programmed to sound if motion is detected from a particular camera. Now that should hopefully deter any burglar!

We were massively impressed with the quality of the recording and live-streaming of video, and the range of features, including two-way audio and nightvision. The build quality on the cameras is excellent, and the magnetic base is sturdy, while giving you great control over the camera's viewing angle.

The app is full of great features that allow you to personalize your control of the Arlo Go cameras, including the built-in siren, which makes the product a particularly useful burglar deterrent.

The base station makes the Arlo Pro 2 both more difficult to set up, and more expensive than other cameras on the market. In terms of setup, we had particular difficulty due to an incompatible router.

In addition to this, the app – while being feature-filled – is a little difficult to navigate, making some of the features hard to find and adjust.

It’s easy to see why Arlo  is a popular choice with those who take home security seriously. There’s no doubt this is one of the most advanced systems we’ve tested with a wealth of useful features including a built in siren and control via the web.

However, set up was much more difficult than we’d hoped largely because of the inclusion of a base station that needs to be connected to your broadband router. Furthermore, it’s not the most intuitive systems around with many of the most useful features difficult to find using either the app or the web interface.

The camera build quality is excellent on the Arlo Pro 2, as is the image quality both streaming and recording. The inclusion of free cloud storage is a real boon, and the Arlo ecosystem is feature-rich, including great integration with Amazon's products, including Alexa control, and the ability to display the video feed on Echo devices.