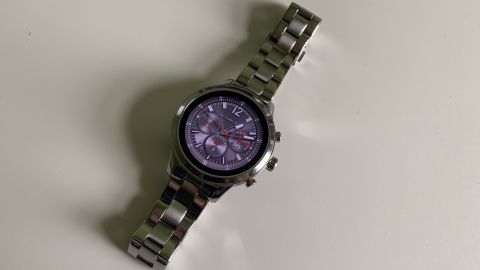 The Michael Kors Access Runway is a stylish smartwatch that builds and improves upon the success of its predecessor - the Access Sofie. Its battery life could still be better, and it's not the most practical of fitness wearables, but there's no denying it's a classy device.

Reiteration seems to be the key word for Michael Kors and its plan for smartwatch domination. Where the Michael Kors Access Sofie improved upon 2016's Access Bradshaw, the Access Runway has improved upon that success even further.

It's still not perfect, and this isn't a watch that will entice fitness fans, but it's a suitably stylish fashion smartwatch that will attract many new owners.

Its key features are a little stronger, a little more confident than before, but you'll still find yourself wishing the battery life could be longer. That beautiful build quality may encourage you to forgive it, though.

As before, the price of the Access Runway heavily depends on the strap you choose. The 'budget' option (available for £269 / $295 / AU$499) features a silicone strap that won't capture one's attention quite like the pricier-looking (£349 / $350 / AU$599) silver-tone stainless steel strap that we got to try.

Both look elegant though, albeit in very different ways, and would easily befit someone keen to make an impression at a business meeting or when out dining.

There's also always the option of buying from a third-party retailer for a small price cut. A price cut that is likely to continue to slide down if the depreciation of the Access Sofie is anything to go by.

A little more feature rich than before, this is a tempting proposition for someone yet to be ensorcelled by the looks and design of the Apple Watch 4.

The Access Runway looks familiar to anyone used to the Michael Kors line of smartwatches, but with a few key changes. It's slimmer than its predecessor and a little smaller, fitting more appropriately on a woman's wrist than before. It's still oversized but in a more classy way, rather than a way that makes you fear it's clunky looking.

Offering a fully rounded display again, it comes in at 41mm with 18mm lugs. There's no sign of the glitzy gemstones that embellished the Access Sofie, and that's certainly a good thing when it comes to everyday use.

It means the Access Runway is lighter, and more likely to blend into your everyday wear, while still avoiding the plasticky look of some other smartwatches (we're looking at you, Apple Watch).

The Runway has three buttons on the side. The larger middle button is a rotating crown that's used to open up your apps menu, and allow you to scroll through options, or return to the home screen.

The other two buttons are customizable. They arrive with one that opens up the Michael Kors Access app and the other opening Google Fit, but you can always dive into the Settings to customize these buttons to something you're more likely to use.

This seems very likely when it comes to the button for Michael Kors Access at least. After all, how often are you likely to need the app after initial setup?

At purchase, there's a choice of colors for the metal bracelet straps or an option to go with the cheaper silicone strap. Like the Access Sofie before it, the metallic bracelet straps continue to be a little awkward to swap out, as you really need to go to a jeweler to get it done correctly.

This time round though, the strap looks more like something that would work for most occasions, with perhaps the notable exception of heading to the gym.

The Michael Kors Access Runway is water-resistant to 3 ATM so you can easily wear it in the pool for a few lengths or even underwater swimming, although it won't handle diving.

Given its fashionable exterior, the metallic watch strap isn't really the kind of thing you'd want to take in the pool with you, which is where having a silicone strap would come in handy.

There's also the addition of an optical heart rate monitor on the back of the watch. It sticks out ever so slightly from the back of the casing but you'll struggle to notice it when wearing the Access Runway.

As usual, charging is conducted via a small round magnetic puck which secures itself underneath the smartwatch. The magnet holds on tightly to the surface.

The Michael Kors Access Runway continues to use the same display approach as the Access Sofie before it. That's a really good thing. The watch face diameter is a tiny bit smaller at 41mm rather than 42mm, but its screen remains a 1.19-inch AMOLED with a 390 x 390 resolution.

Everything from app icons to notification text looks suitably clear and bright, no matter what the weather is around you. Even in direct sunlight.

It's not as big a screen as the Apple Watch 4's but it does put it directly on a par with fashionable competitors like the LG Watch Style and Huawei Watch 2. It's as classy and premium looking as the exterior shell is.

By default, it also has an Always On display so that the watch face merely darkens a bit when you're not using it. It's a subtle way of meaning that you don't have to 'flick' your wrist up awkwardly to 'activate' the watch just to see what time it is, although obviously it has a minor effect on the battery life.

The addition of numerous more subtle interactive watch faces further enhances that sense that you're wearing a standard watch rather than a smartwatch that needs poking to get going.

The only issue here is a familiar one left over from the Access Sofie. If you have large fingers, you may find it occasionally difficult to tap and select small icons. Still, that's not much of a deal-breaker when you bear in mind that owners of women's watches will typically have smaller hands anyway.