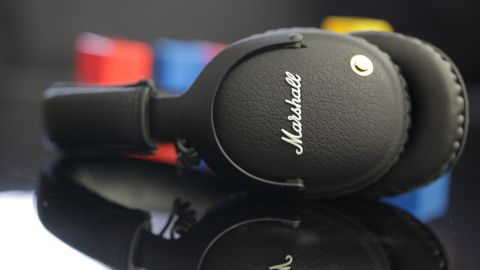 The Marshall Monitors are another welcome Bluetooth update to the top of the Marshall headphone line. Though they don’t change much in terms of design and the slightly bass-favoring sound balance remains, they do add good Bluetooth functionality with a strong 30 hours of battery life to make matters better. It's just a shame that despite this long battery life they become uncomfortable after a couple of hours wear.

We all hate wires. We may love what they do but if something can go wire-free and still perform its function at the same level then we’re more inclined to want to cut the proverbial noose.

It happened with gaming controllers and it’s happening with sound systems, which explains why Marshall is releasing wireless Bluetooth versions of all its headphones.

Following the re-release of the on-ear Marshall Major II and Marshall MID models, the Marshall Monitor is the first over-ear model to have its wires cut and finally brings Marshall's top of the line 'phones into the Bluetooth fold.

The Marshall Monitors were first released as a wired model around 4 years ago and they were generally well received. Though there haven't been any massive overhauls in terms of design here, the addition of Bluetooth is more than welcome.

The Marshall headphone design is one that’s simultaneously familiar and striking. You know immediately that you’re looking at a Marshall product as aside from the very prominently placed brand name, the Monitor headphones feature the black leathery surface with contrasting white and gold accents that we see across the brand’s other products.

It treads the fine line between attractive and gaudy which perfectly suits the rock genre that Marshall is so intricately tied to. It really depends on your particular taste whether or not you'll love it or loathe it.

The fact that the coating on the Monitor headphones isn’t real leather might be a positive for those uncomfortable with the use of animal products, but the rubber and plastic alternative that’s used doesn’t look or feel particularly premium. It's a disappointing finish considering the price of the headphones.

Aside from this, though, the Marshall Monitors do still look good and if you appreciate the Marshall aesthetic you’ll be pleased.

The inside of the Monitor headband is thick, soft and very comfortable, a feature which extends to the removable ear pads. That said, despite the plush padding and initial comfort, after a long period of wear we did begin to feel some uncomfortable pressure from the headband just above our temples.

On each side of the headband there are nice brass left and right labels to let you know which way to put the headphones on, something which is particularly important as it will affect how you use the built-in control knob on the left earcup.

The arms of the headphones are adjustable but the mechanism behind this feature is neatly hidden by the headband. Adjusting them is as simple as pulling the earcup down from the headband and there’s a good size range available. We tried the headphones on a group of people of varying head size and none of them had any trouble getting the cups to fit comfortably over their ears.

The Marshall Monitors are over-ear headphones, meaning the earcups are supposed to fit comfortably around your ears and give a greater degree of noise isolation that on-ear models. Though we experienced some discomfort from the headband after a long period of listening, the earcups at least remained spacious and comfortable no matter how long we had them on.

Despite being over-ear headphones which are traditionally less inclined to portability, the Marshall Monitors are designed to be extremely easy to fold away and carry around.

This makes the Marshall Monitors a great over-ear option for commuters and frequent travelers as they’re extremely easy to put neatly into your bag or spacious pocket.

Naturally the biggest design advantage that these headphones have is the fact that they’re Bluetooth connected and therefore wireless. However, should you run out of battery,the right ear cup has a 3.5 mm input which you can plug the provided cable into (although unfortunately this means that the volume controls on the headphones themselves won't work).

Speaking of which, considering it’s not essential, this cable is very nicely designed. It’s thick and styled like a guitar amp lead with the signature Marshall gold accents on its plugs meaning even if you do have to use it you won’t detract from the overall aesthetic of the headphones.

So, going wire free is great from a design standpoint but how does it actually work when using the Marshall Monitors?

Overall it does the basics but it does them well. There’s no noise cancelling or multi-device connecting here, but you do get solid Bluetooth technology, a built-in microphone and neat built-in controls to enjoy.

Marshall hasn’t stayed in the sound business for this long based on a good looks alone. As you’d expect, the sound quality you get from these headphones is strong. It’s not the best or most balanced, certainly, but they give a solid performance worthy of their price range.

They lean slightly heavily on the bass which is great for electronic music and when we were listening to The Weeknd's The Hills, the bass was exceptional while the vocals remained crisp and clear.

The lack of balance in the Marshall Monitors isn't enough to impact many genres, but it does mean if you’re a fan of instrumental and classical titles you won’t hear these songs at their absolute best. It wasn't severe enough to bother us but we did notice that sometimes the lower register instruments were slightly too prominent in moments where the higher registers were supposed to shine.

The gold control knob on the left earcup is one of our favorite features on the Marshall Bluetooth line. It’s unobtrusive – arguably it actually adds to their look – but it also performs basic volume, pause/play/skip track functions and call taking controls so that you don’t need to take your device out of your pocket or bag.

You don’t need to worry about connection dropping while your device is stored away, either, as the Bluetooth connection on the Marshall Monitor headphones is strong. Thanks to Bluetooth aptX you can wander around 30 feet from your device though obviously watch out for particularly thick walls and objects as they will still cause a connection problem.

The battery life on these headphones is another particularly strong point in their favor. At around 30 hours you won’t find yourself charging them up a lot which is great considering the growing number of devices we find ourselves having to plug in night after night.

If you do ever run out of battery you can always rely on the cable that comes with the headphones. This cable as we said previously is well-designed and it features a button for pausing and playing your music as well as taking and rejecting calls.

The inline microphone on this cable means you’ll be able to speak on the phone too and arguably this inline microphone is actually better than the one built into the headset itself as it’s less affected by outside noise and more tucked towards your mouth.

The big problem with the inline controls is that there’s no volume control. This is an essential feature of inline controls and it just seems like careless oversight that it’s not available, especially considering the cable is so otherwise thoughtfully designed. A single knob on the main headset is able to perform multiple functions which makes this limited functionality stand out even more.

A convenient additional function of the cable is that when you’re listening to music via Bluetooth, someone else can plug their headphone into your the Monitor’s 3.5 mm input and share the music you’re listening to. This built-in splitter functionality is a nice way to make up for the fact that the headphones don’t have multiple-device connection via Bluetooth.

To be honest, the biggest competition the Marshall Monitors are likely to face is their less expensive on-ear counterpart, the MID headphone. With almost identical features and performance, the biggest difference is shape and degree of noise isolation offered which may not be enough to everyone to justify the £50/$50 more for the Monitor model which comes in at £269/$249.

Though they're not the best headphones on the market by any means the Bluetooth Marshall Monitors are a conveniently compact over-ear option. As you'd expect they look good thanks to the iconic Marshall design and with 30 hours of battery life it's nice to have a piece of tech that won't require charging every evening.

One of our favorite features by far is the multi-purpose control knob on the left ear cup which neatly offers a variety of controls meaning you truly get to take advantage of the wire free Bluetooth technology by leaving your device in your bag.

As a result of the slight imbalance in sound, the classical and instrumental tracks we love so much didn't always sound at their very best. More frustrating than this, though, was the pressure on the temples that appeared without fail after a few hours of wear. For headphones with such a long battery life this is certainly unfortunate.

Another annoyance is that despite the fact that it looks great, the cable that you use to connect your phone when the headphones run out of battery doesn't have volume control. This is an inconvenient oversight, particularly as the control knob on the headphones themselves doesn't work when they're out of battery.

If you're looking for reasonably priced over-ear headphones with a long battery life and genuinely great portability the Marshall Monitors are a solid choice. We wouldn't, however, call them the only choice.

It's worth bearing in mind that though they offer good sound and design, for those who like to wear their headphones a few hours at a time, there is a chance that you could experience some discomfort and although it offers clear and crisp sound it's still not perfectly balanced.