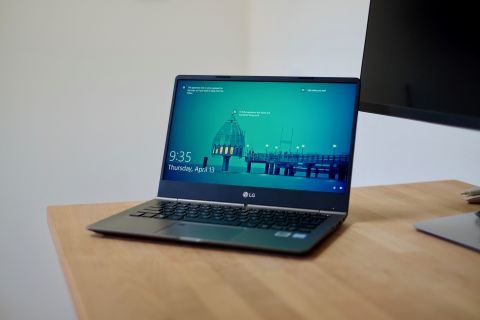 Between the screen that bounces with each touch and a housing that feels hollow, the price tag doesn’t match the build quality of the LG gram 13 despite its incredible battery life.

With portable and powerful laptops priced below the psychological barrier of $1,000 now somewhat of a commodity, the premium segment is one where a device has to live up to its price tag. Typically, manufacturers set themselves apart from the pack with design, and unique features (fingerprint unlock, excellent battery life, etc.).

The LG gram 13 we reviewed costs much less than Apple’s 12-inch MacBook and comparably to Dell’s XPS 13. On the spec sheet, the gram 13 is more similar to Dell’s offering than Apple’s MacBook, having far fewer ports and a different class of processor (Intel Core i5 for LG vs. Intel Core m5 for Apple).

That said, we find that the LG gram 13 struggles to live up to that four-digit price point, especially when stacked against comparably-priced Ultrabooks.

Here is the LG gram 13 configuration sent to TechRadar for review:

LG currently sells two variations of the LG gram 13. One version  – the version we received – has a touchscreen, while the other variant comes in white and lacks a touchscreen and fingerprint sensor.

We were unable to find any models with improved specs or the option to personalize the LG gram 13’s internals.

Furthermore, out of the US, UK, and AU LG web stores, the LG gram 13 was only listed in the US store. The good news is that LG uses third-party sites, such as Amazon or B&H Photo to fulfill orders of the gram 13. In other words, if you live in a country where LG doesn’t expressly offer the gram 13, you can try to order through another seller.

As for whether you should, well, we’ve found comparably-priced laptops with far stronger build quality (but not better battery life) than what’s on display here – we’ll just say that for now.

LG touts that the exterior of the gram 13 as made of a “nano carbon magnesium alloy;” a metal compound that feels more like plastic than the aluminum shell competing higher-end laptops typically use, but also tends to be lighter.

With the lid closed, the gram 13 measures a mere 0.6 inches (15.24 mm) tall at its thickest point. On the right side of the laptop is where you find a microSD card reader, headphone/mic jack, and a USB 3.0 port.

The left side of the laptop is home to the charging port, another USB 3.0 port, a full HDMI port, and a USB 3.0 Type-C port. Additionally, this is where you can find two indicator lights – one a charging indicator, the other a hard drive activity light.

With the lid open, the first thing you’ll notice is a black rectangle in the upper-left corner of the trackpad. Admittedly, at first we thought the rectangle was yet another sticker – such as the “Powered by Intel” decal or Energy Star assurances – we would have to remove.

After a few seconds, however, we quickly realized it was the fingerprint sensor. It’s an odd place for one, considering you’re not likely to scan your finger as often as you’ll use the tracking surface for everything else. It doesn’t get in the way, per se, but we found ourselves ignoring the upper left portion of the trackpad altogether.

Just above the keyboard, lodged into the laptop hinge, is a 1.3-megapixel webcam, relocated from the more traditional location of above the display. By moving the camera down, LG was able to use smaller bezels to on the sides and top of the screen. The same, unfortunately, can’t be said about the bezel below the screen.

In total, the gram 13 weighs 2.07 pounds – or 939 grams, if you were curious. It’s incredibly light and doesn’t bog down a backpack as you trek from meeting to meeting or class to class.

Fingerprint ID is a fine bonus

Setup and use of the gram 13’s fingerprint sensor is similar to that of any modern smartphone with a similar feature – in fact, it closely resembles the process LG uses on its flagship smartphones.

After touching, lifting, and replacing your finger on the sensor, the gram 13 learns your fingerprint and uses Windows Hello to unlock your computer with a touch, instead of a password.

Windows Hello is a convenient way to streamline the login experience, either when switching user accounts or signing in after the gram 13 has been turned off.

We didn’t have any issues with the scanner recognizing a finger, with very little time elapsed between a touch of the fingerprint sensor and the computer unlocking.

One design choice we have to question is the location of the stereo speakers on the gram 13. Each speaker is located on either side of the device, with two nondescript ports barely noticeable.

During our testing, the speakers were often muffled or inadvertently covered up when using the gram 13 on a lap, or even by placing an arm next to the side of the unit.

Even when the speaker ports are left unblocked, the sound quality and volume is rather weak and quiet. Listening to music often required a volume setting of 70 or higher just to hear at a comfortable level.