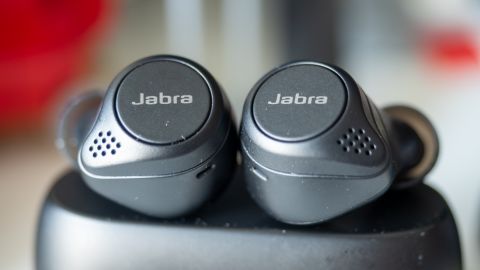 The Jabra Elite 75t improves upon its predecessor in just about every way, except tonal balance. The 75t offer much improved battery life, a much smaller charging case, and more comfortable fit but their bass is overwhelming... and not in a good way. While the EQ in Jabra’s app fixes that, the EQ settings won’t be saved if you’re using them with a computer, making them compromised for any device that doesn’t support Jabra’s app.

The Jabra Elite 65t always topped our list of best true wireless headphones thanks for their good battery life (at the time), customization, sound quality, and price. But over the last couple of years, the competition has gotten a lot better and Jabra had to respond.

The new Jabra Elite 75t, on paper, looks to be a mild upgrade over its predecessor but in use, the changes feel much more significant. The headphones and charging case are much smaller, battery life makes an immense jump, catching up to the competition, and the customization features we enjoyed in the 65t remain.

However, there is an Achilles' heel with the Elite 75t, which is its extremely bass-heavy sound signature. They provide more bass than the Skullcandy Push - which, while impressive, is simply too much and overwhelms the mids. If you're the kind of person who loves heart-pounding dance music, though, the Jabra Elite 75t are a worthy upgrade over the 65t.

The Jabra Elite 75t are 20% smaller than Jabra's previous in-ear true wireless headphones, the Elite 65t. While that doesn’t sound like much on paper, it’s a dramatic difference in the hand. Whereas the Elite 65t’s earbuds were simply too big to fit some ears, the diminutive earbuds of the Elite 75t should be small enough to fit just about anyone.

Each earbud still features a single button, but gone is the volume rocker of the Elite 65t. Instead, a long-press of the left earbud increases volume while a long-press of the right earbud decreases volume. Unfortunately, this volume control means it’s extremely tricky to dial in the exact volume you want and we found ourselves overshooting our desired volume quite a bit. It’s simply easier to change volume from the phone.

Thankfully playback controls are intuitive though, and you can still summon your phone’s assistant, plus Alexa users have the option of using it as the default assistant, which can be changed in the app.

Despite being smaller the charging case now provides an additional 20 hours of battery life for a total of 28 hours, which is especially impressive when you take into account that the 65t’s charging case only held 10 hours of charge and was substantially bigger. The smaller charging case means you’ll be able to slip the headphones into your pocket comfortably.

When it’s time to charge the headphones, you’ll be treated to USB-C instead of the 65t’s microUSB port. The inclusion of USB-C means there’s fast charging as well, which nets you an hour of playback from just 15 minutes of charging.

Speaking of the charging case,it's now fully magnetic, too. Previously, the 65t was held in close by a tab, which wasn’t as satisfying to use as the 75t’s magnetic lid. The headphones are also held in by magnets so there’s no risk of the headphones rolling out of the case.

In terms of materials, the Jabra Elite 75t are made entirely of plastic and rubber, giving them a utilitarian look and feel. They’re IP55 splash resistant so they will put up with your sweat at the gym but don’t dunk them. While made of plastic, the Elite 75t feel very well put together and are grippy, which helps discourage accidental drops.

While the design is a huge improvement, sound quality takes a step in the wrong direction with too much bass. The amount of bass impact the Elite 75t generate is incredible but it’s also fatiguing. Big bass isn’t always a bad thing, as we saw with the Sol Republic Amps Air 2.0, which have gobs of quality bass. But the bass on the Elite 75t is not very good, muddying the mids and losing detail. (We would go as far as to say the default EQ curve is unlistenable as it gave us headaches during extended use.)

Thankfully, the Jabra app has a customizable EQ that let us dial down the bass. Reducing the bass and mid-bass frequencies by 50% made the headphones closer to neutral. However, this means that you won’t have access to the EQ settings if you’re using the Elite 75t with devices that don’t support their iOS or Android app, like your laptop. We wish Jabra would have tuned the 75t to be neutral and allow those who wanted more bass to increase it with the EQ.

Battery life is excellent, with the headphones lasting around 7 hours on a single charge and the charging case is capable of topping the earbuds from flat for an additional 3 full charges. The fast charging feature is also nice when you need to top up in a pinch.

Call quality is something Jabra has always excelled at and that’s no different with the Elite 75t: it's excellent and our friends and family had no issue understanding us. Just be aware that, because the right earbud acts as the primary control unit, it's the only one you can use in single earbud mode.

While the bass-heavy tuning was disappointing, the Jabra Elite 75t is still a worthy successor to the excellent Elite 65t. The reduction in size and the significant increases in battery life make the Elite 75t a pleasure to use. And while they don't have the best sound quality and it lacks active noise cancellation, neither stops them from being a solid pair of truly wireless headphones to use, especially if you make frequent calls with your your headphones on.