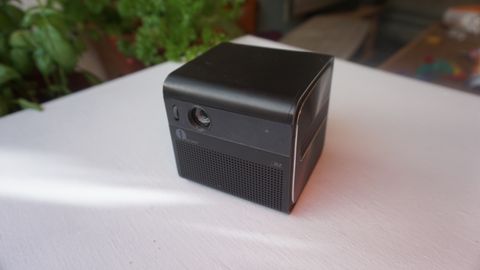 1byone's jack-of-all-trades projector throws everything at the wall, and most of it sticks. With a capable display and an abundance of functionality in a miniature package, the GoSho is a nice compromise between portability and home cinema smarts.

The snappily-named GoSho claims to be the “World’s Most Powerful Mini HD Projector”. But what does that mean, and why would you want one?

There are more ways than ever to recreate the cinematic experience in your home. And while the idea of forking out for a 60-inch, 4K television and accompanying surround sound system will make some of you balk – though we have a list of the Best 4K TVs if it doesn’t – there are plenty of lower-cost alternatives to get your favourite films up on the big screen.

Enter the projector. Or, at least, its miniature sibling – as the kind of high-end projectors real cinephiles have in their homes can easily run into the thousands.

The mini projector is a compact compromise that allows you to simply throw your films, videos, or Powerpoint slides onto a wall or roll-out screen, without the weight, expense, or energy usage of its larger counterparts.

After a runaway crowdfunding campaign on Indiegogo, Canadian developer 1byone are gearing up to ship out their take on the mini projector, and we found the GoSho encapsulates the numerous advantages – and disadvantages – of this technology.

The mini projector is all about size. If you’re travelling for your work, or giving a presentation in various locations, having a projector you can fit in your hand luggage is a major boon.

The GoSho isn’t quite pocket-size, but it’s 3.5-inch sides are each small enough to rest in your palm, and would fit easily into a rucksack or holdall in transit – while the miniature kickstand on its underside proves hugely useful for raising the angle of the projection.

Even if it stays within your home, it’s reassuring to know you can move your ‘home cinema’ setup into another room with relative ease. While it’s best used on a white wall, it’s not a firm rule: depending on what you’re showing and the level of light in the room, it could come up perfectly well on a coloured curtain or wooden surface.

The downsides to this portability is that the display can only do so much with what its given.

‘HD’ is often loosely used, and can be a bit of a misnomer in these cases – but ‘HD ready’ tends to refer to a minimum 1280x720 resolution, while the GoSho is only capable of the slightly smaller 854x480.

This difference in quality is naturally pronounced when attempting to project a wide display. While a line of 720 pixels can look great on your 14-inch laptop, it looks significantly more grainy when stretched out to 200-inches along your living room wall.

We tried out the kit with our HD Netflix account, to finally get round to watching 2016’s Star Trek Beyond (we’ve been busy). We were pleasantly surprised at how clear the picture at a 100-inch display, while the large spectacle of the USS Enterprise looming overhead more than compensated for the reduced picture quality.

A large factor in this in the brightness of the GoSho, which manages around 180 ANSI lumens – a metric of brightness quantified by the American National Standards Institute (any projector just with ‘lumens’ may not have been independently tested).

A full-sized home theater projector will be looking at 1500-2000 lumens, but mini projectors are usually only in the 50-100 region. In a darkened room 180 lumens was certainly enough to enjoy the film on offer.

It’s the functionality of the GoSho, however, that really makes it notable.

Not only does the GoSho boast an impressive brightness, projection size, and portability for its category of device: it also manages to work in tandem with a wide array of other devices.

You can plug in a flash drive to its USB port to show some family photos; plug the HDMI cable into your TV to show the football; use the device’s Bluetooth to stream content from your smartphone; or use Alexa to navigate its menu panes and video content, instead of the accompanying remote.

The range of ports and connectivity is hugely convenient, and means you’re likely to avoid unpacking the GoSho and finding you don’t have the right devices or cables to hook up to it.

We did have some niggling issues with the remote, which requires you to navigate via vertical and horizontal buttons, rather than tracking your position. Theoretically, it should be able to use infrared to realize when you’re pointing at the screen, but we found it didn’t always clock this in practice.

The GoSho's 'auto-keystone correction' also aims to adjust the screen angle to best fit the surface it projects onto, but again this didn't fare as well in practice, and we found the auto-feature continually making new adjustments when we didn't want it to.

The GoSho is set to start shipping out to backers in August, with more extensive packages including travel pouches or walnut-finish units to follow a couple of months later.

Those looking for a top-class home cinema experience won't be well-served with this. But as home viewing and streaming continues to grow, and while high-end projectors remain out of reach of many households, the GoSho marks a notable step towards a jack-of-all trades device.

It might not excel as either a super-slim pocket projector or all-out home cinema machine, but for the average viewer wanting to stream their favorite shows or videos in a practical, flexible way, 1byone is finding there may be a sweet spot somewhere in between.