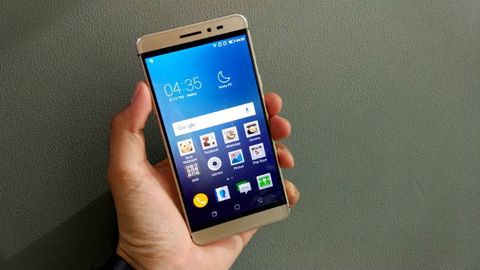 Coolpad is playing the cards with its dual-system security feature and has loaded the Coolpad Max with decent hardware. However as far as the overall performance goes, the sub Rs 25,000 price category has much better options in the form of Xiaomi Mi 5, Lenovo Vibe X3, Moto X Style, etc.

Recently, Coolpad forayed in the upper mid-range smartphone market with the launch of its latest handset-  Coolpad Max, which features a metal body, 2.5D curved-edge glass display and a  decent spec sheet. But the highlight of the smartphone is its  'dual-system' security mode, which allows users to isolate their  personal stuff from work and keep two distinct accounts for Facebook,  WhatsApp and other social media applications.

Is it enough to create ripples in the market or the company has made  an early attempt in the upper mid range smartphone category with the  Coolpad Max? Let's find out.

Coolpad Max is indeed a step up in terms of design when compared with the previous affordable smartphones from the company. And that is quite understandable as it costs almost three times more than most of its Coolpad Note series smartphones.

The smartphone comes with a full-metal unibody and feels quite robust and well constructed. The 2.5D curved glass at front adds to the premium design and comes with Gorilla Glass 4 protection. The rounded edges give the Coolpad Max an ergonomic structure, which otherwise feels a bit large to operate with one hand. The Xiaomi Mi 5, which is also priced at Rs 25,000 is a better fit for one hand operation than the Coolpad Max, but that is also because the former features a smaller 5.15-inch display.

Coolpad Max's design also reminds us of iPhone 6S Plus, especially the Rose Gold variant. However that's not a bad thing as the latter is one of the best looking handset in the market.

The front has a 5MP shooter on top of the display along with an earpiece and a notification LED. The bottom has the microUSB slot (no Type C) and two speaker grilles, one of which is an actual speaker and the second is just for adding symmetry to the design. You will find the power button and SIM/microSD tray on the right side, which can accommodate one nano-SIM card and a second nano-SIM card or a microSD card. The volume buttons are on left side. The rear has fingerprint scanner with a nice shiny ring around it and a 13MP camera paired up with dual-tone LED flash.

The phone will be available in Royal Gold and Rose Gold colours.

The Coolpad Max has a 1.5 GHz octa-core Qualcomm Snapdragon 617 CPU, 4GB of RAM and 64GB internal storage that can be expanded by up to 64GB via microSD card.

The specifications sound rather impressive on paper with one big flaw- the Snapdragon 617 CPU, which is rather unforgivable at a price tag of Rs 25,000. Just to give you a better understanding, this is the same CPU that powers up the Moto G4 and G4 Plus which are priced under Rs 15,000. At its price-point, Coolpad Max competes with Xiaomi Mi 5, which is powered by the flagship Snapdragon 820 SoC.

As far as connectivity goes, Coolpad Max has Wi-Fi, Bluetooth 4.0, A-GPS, FM radio, and USB OTG. There's 64GB inbuilt memory with microSD support by up to 64GB. Coolpad Max misses on NFC and infrared, which are offered in some of the smartphones priced around Rs 25,000.

The 5.5-inch display did not disappoint us. It is fairly bright, feels vibrant and offers crisp content. The pixel density rests at 401ppi, which is good for watching videos and playing games, however we noticed reflections at the edges of the screen, which creates a problem if you are using the smartphone in direct sunlight.

The display gets a 2.5D curved Gorilla Glass 4 protection.

When it comes to computing power, the Snapdragon 617 SoC is not a match to the flagship Snapdragon 820 SoC. The smartphone suffers from frequent lags and hiccups and the day to day performance is just not as smooth as you would like.

The keyboard slows down occasionally; there is a delay of a second or two while launching applications with random lags and jitters in everyday usage. What's surprising is that games like Subway Surfers and Asphalt run reasonably well, which makes us question the optimization of Coolpad's UI.

The keyboard lags a lot, and the RAM management is extremely poor. With just a few applications open, the available RAM drops to about 500 MB.

However, we found the fingerprint sensor extremely responsive. It does not waste time in reading the fingerprint and works fine most of the times in unlocking the smartphone. The audio performance is also decent and the speaker delivers loud and clear sound.

Above and beyond the customization done by Coolpad on its UI, the company has adopted a Gold colour theme for the Coolpad Max. The Gold theme, supposedly done in a bid to look premium ends up looking extremely tacky and garish.

Coolpad has skinned even the icons for popular apps like Facebook and Whatsapp in the same Gold hue, which cannot be changed even if we apply another theme and feels irritating at times. The Chrome icon for instance resembles the camera icon for stock Android and that is very confusing.

The interface thus lacks polish and feels unfinished. The icons look extremely amateurish and the overall experience is not user friendly.

The Coolpad Max also comes bundled with a fair amount of bloatware which bars the supposedly 'premium' experience.

The distinctive feature of the smartphone, one which Coolpad have been highlighting tremendously, is its 'Dual-System' security feature.

The phone is equipped with Dual Isolation technology, which means it has a separate external open system that handles all features normally expected in a smartphone and a secure internal system which encrypts user's sensitive data such as calls and text messages. In addition, the smartphone also allows user to have two accounts on services such as WhatsApp, Facebook, Messenger and so on.

The best way to describe how this feature works in day to day use is that it feels like having two separate smartphones. If you sign into your Facebook account or configure Whatsapp in one mode, say the private space, they exist solely in the latter. Once you switch back to the main space, you can log into Facebook with another ID.

Access to the private space can be locked with a passcode or through the fingerprint scanner. Additionally, one can also configure if they want notifications from the accounts in the private space to come in the main space. There is also the option to share files and data between the two spaces.

The rear 13MP camera with a dual tone LED flash is rather mediocre, not befitting a Rs 25,000 smartphone. The images captured are not bad by any means, in fact they are crisp and vibrant, but they lack detailing and have a lot of noise.

The problem for the camera is the fact that at this price point, the bar is raised significantly higher than the usual sub Rs 10,000 price range Coolpad is used to.

The front camera is decent for the occasional social media selfie, but not for much else.

Coolpad Max is backed by a non-removable 2,800mAh battery unit. It seems a bit underpowered but gets the support of Qualcomm's Quick Charge 3.0, which can quickly boost up the battery and works really well in real life. And that is something you actually need with the Coolpad Max as the 2,800mAh battery unit is not powerful enough to last for a day with moderate to heavy usage. You need a charger or a power bank handy with you if you are always hooked to your smartphone for browsing web pages, playing gaming, social networking and other everyday tasks.

Coolpad Max is designed very well and looks quite premium. The smartphone's display is decent and the dual-security feature is a nifty addition that will come handy for users who want to keep their work and personal stuff separate. The fingerprint sensor is very snappy.

The Snapdragon 617 CPU does not complement other aspects of the smartphone and offers a mediocre performance. The phone suffers from memory management issues and is clearly not well optimized. Besides, the UI is not user friendly and the camera and battery performance is not the best in sub Rs 25,000 price range.

Coolpad is betting on its dual-system security feature and seems to have priced itself out of the market when it comes to other aspects of the smartphone. No doubt the new handset is designed well and features a stellar build quality, excellent fingerprint senor and a decent display. However, the smartphone is not a catch at Rs 24,999 price-tag. The cameras are mediocre, performance is questionable and the UI is an unappealing mess.

If you fancy the dual-mode security feature and can compromise on features like 4K video recording, lag free 3D gaming and camera performance, then it can cut a deal otherwise the market has much better options in the form of Xiaomi Mi 5, Lenovo Vibe X3, Moto X Style, etc.