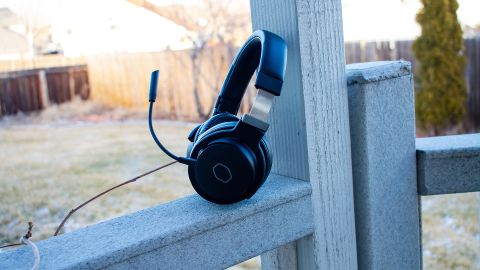 The Cooler Master MH751 stereo gaming headset does a lot right. It has decent sound quality, an excellent microphone and it’s comfortable enough to wear for hours. But, it’s not worth the inflated price.

There are so many great high-end gaming headsets out there these days, Most come packed to the brim with bells and whistles in a trend that has led to inflated prices. That’s why, when we can find one of the best gaming headsets that focuses on the bare essentials, we take notice – and we’ve definitely taken notice of the Cooler Master MH751 headset.

The Cooler Master MH751 will set you back $79 (£74, AU$99) for a solid stereo headset with a detachable mic. Beyond that detachable mic, the focus of the product is providing a barebones gaming headset that you can count on, without paying for extra features you don’t need.

At this price point, it goes up against comparable budget headsets like the Logitech G Pro at $89 (£84, AU$99), but the lack of virtual 7.1 surround support might be a deal breaker for some users. In that way, the Cooler Master MH751 seems to compete with the much cheaper Corsair HS50 stereo gaming headset, at $49 (£39, AU$89).

Does the Cooler Master MH751 justify the added price over Corsair’s stereo headset?

Rather than adopting an edgy “gamer” aesthetic, the Cooler Master MH751 has a utilitarian and comfortable design. And, when we say comfortable, we mean it. This headset features leatherette ear cups packed with plush padding. This same padding wraps around the metal headband, as well.

On the bottom of the left earcup is a port for the removable mic. We like the idea of a removable mic, and in practice, it sits nice and snug. However, we would have liked to see a cap to occupy the slot when the Mic isn’t in place, just to keep any errant dust out. The Cooler Master MH751 does come with a carrying bag, but that won’t do much if you don’t like the mic sticking out while playing a single-player game.

The removable mic actually goes a long way to demonstrate the focus on portability here. We already told you just how lightweight the headset is, but because the earcups can swivel flat, it should be easy enough to store in a backpack. And, because it doesn’t look like a gaming headset, you can easily wear it around without sticking out like a sore thumb.

And, you might actually want to carry the MH751 around, too. Because it’s using an analog cable, with a separate breakaway cable, it’s not a bad candidate for carrying around and using it with your smartphone (assuming it has a headphone jack). There’s even an inline control, which will let you control volume and mute the mic – if you leave it connected.

The cable itself is nice, too. It’s braided and thick, so you won’t have to worry about it getting worn out too easily. However, if it does get worn out, the cable is replaceable.

At the end of the day, the design of the Cooler Master MH751 focuses on a comfortable build that won’t stick out too much, and it totally succeeds in that mission.

We’re going to be honest, when we saw both the price of the Cooler Master MH751 and the specs, we were a bit skeptical. The Cooler Master MH751 is a stereo gaming headset with 40mm neodymium drivers and a relatively low impedance of 26 ohms. Compared with the cheaper Corsair HS50, another stereo headset with 50mm drivers and a higher impedance, it’s not looking too great on paper.

Driver size typically denotes how loud and full a device’s sound quality will be. Meanwhile, impedance is a good measure of how susceptible headphones and speakers are to blowing out at high volumes.

Numbers aren’t everything, though, as the Cooler Master MH751 sounds great – as long as you don’t crank the volume. While listening to Undo by Björk at full volume, we ran into some buzzing near the end of the track. Take it down to a more moderate volume, and the sound is full, balanced and all around just pleasant to listen to.

This continued into actually playing games, too. Whether we were replaying Metro 2033, getting ready for Metro Exodus, or just chilling out in World of Warcraft, the Cooler Master MH751 was up to the task. In fact, the experience in Metro 2033 was so immersive that we got a bit freaked out in a couple sections, thanks to the creepy audio effects that lesser headphones might miss.

What is especially notable here – and this surprised us – is just how good that removable microphone is. We tested it out initially in Audacity and it sounded better than the $199 (£199, AU$349) Razer Nari Ultimate that we use as a daily driver. And, that result was repeated when we played some games with a friend on PS4.

At the end of the day, the Cooler Master MH751 high end fidelity is a little too limited for the price you’re paying. This problem is likely going to become noticeable if you’re used to using high-end audio equipment. You can get the same audio experience from a cheaper headset, but the excellent mic might make up for that shortcoming if you play a lot of games with other people.

The Cooler Master MH751 is a bit of an odd gaming headset, and it’s hard to think of the right person to recommend it to. It’s an extremely comfy headset, and you’ll be able to chill and play games for hours, and you’ll forget it’s even there.

At the same time, at $79 (£74, AU$99), there are a lot of headsets out there that frankly pack more powerful hardware – and are quite comfortable, too. Maybe if the Cooler Master MH751 was about $20 cheaper, and went head to head against the Corsair HS50 it would be a better value. Until then, however, you might want to wait for a sale, unless that lightweight comfort and excellent microphone are worth the extra expense.